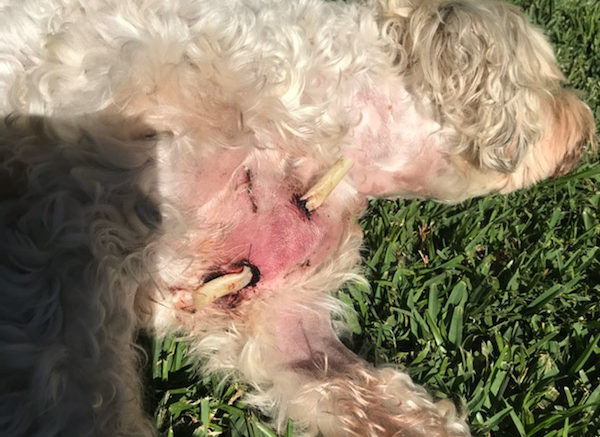 James Foster’s dog, Max, was brutally attacked at Ettalong in May 2021

Calls for dog laws to be introduced on the Central Coast have been heightened after reports suggest local dog attacks occur more than once a day.

Central Coast Council reported that from the period of April 1 to May 1, Council investigated 32 dog attacks.

The suburbs resulting in most of these attacks include Umina and Woy Woy.

At a Council meeting back on April 27, former Administrator, Dick Persson, said that with the Coast having the highest population of dogs in NSW, this was an important community safety issue.

“I have been deeply disturbed by the trauma caused to a pet owner through a dog attack resulting in the fatality of their pet,” Persson said.

“Whilst the overall number of dog attack incidents on the Coast has decreased over the previous four years, given our high rate of dog ownership, dog attacks are still a serious issue for the community and Council’s community safety staff.”

Foster said he was sat with his dog, Max, on May 12 at Ettalong when a large dog approached them, and grabbed his small dog.

“We were just sat there on the wall when a man approached and let the lead go loose,” Foster said.

“The dog ran in, grabbed Max by the head and shook him around like a rag doll – Max is blind, he would have had no idea.

“Seven people, as well as myself, tried to get the dog off him but he just wouldn’t let go.

“His chest and throat was torn open and he had five drainage tubes him for 14 days after.

“At one point I thought it was best to put him down because he was so stressed, but luckily he’s settled down.

Fortunately, Max is on his way to a full recovery, but Foster says it’s not enough, something must be done.

“It’s very important that we get these laws passed so dogs liked mine can never get attacked like that again,” Foster said.

“Rangers want those powers to be able to seize the dog.

The Policy is said to include mandatory penalties where an attack has led to the fatality of another dog unless they are extenuating circumstances – this would be reviewed by an Enforcement Review Panel led by a Council Executive.

The possible consequences for owners of attacking dogs include a $1,320 fine and a Dangerous and Menacing dog order.

These orders require owners to comply with control requirements that are enforceable by law.

A Council spokesperson said this Policy is planned to go before Council in July, where it will then seek approval for public exhibition and comment.

Council has also written to the State Government, seeking a review of dangerous dog breeds – they are still awaiting a reply.

But Woy Woy local, Dick Rijnsburger is calling for more, asking Council to put up security cameras in and around Lions Park.

Rijnsburger and his partner were walking their six-month-old puppy at the Brisbane Water walkway on May 18 when they were attacked by a dog.

Rijnsburger said they were walking 10 metres away from a man who then lost control of his dog.

“The dog came charging at us, all the while making no sound whatsoever, nor did his owner for that matter,” Rijnsburger said

“There was no call back attempt made by the owner.

“When the dog came charging at us, I [attempted] to pick up our pup to protect it from the unavoidable and unprovoked attack.

“Whilst I was bending down to do so, the dog latched on to my upper arm – I threw the dog off my arm leaving a massive laceration and deep punctures.

“As soon as the dog landed on the ground it went straight for our pup and latched on to her behind.

“This dog was still not making any sounds, it was out for blood.

“My partner was in a position to plant her knee down on the dogs neck.

“Whilst trying to free our pup, the owner finally acted and put his full body weight onto his dog to restrain it.”

The pair then picked up their dog and jumped the fence of a nearby property to put a barrier between themselves and the dog.

They said they then reported the incident to the police.

“After the police visit, both the dog and I spent a considerable amount of time in the emergency room getting cleaned up,” Rijnsburger added.

“Neither the police nor council rangers were of much help.

“This would predominantly be [because] the current legislation does not give them the proper tools to be of any help.

“It’s created a lack of trust and confidence in the institutions that are meant to protect and serve.

“Council needs to put up security cameras in and around Lions Park …if these were in place we would’ve had a chance of tracking down the man and dog responsible.”

Rijnsburger said he would also like to see owners of dangerous dogs have to follow a mandatory course on how to manage their dog in public, and ensure their dog wears a harness and muzzle.

“It is worth noting that this man was clearly aware that his dog is uncontrollable, extremely aggressive, powerful and dangerous,” Rijnsburger said.

“This attack was completely unprovoked and could have been a lot worse.

“This man had no ability to control his dog … [he] is basically walking around with a lethal weapon and has no means to control it.”

Council have asked locals to urgently report roaming or uncontrolled dogs by calling 1300 463 964.