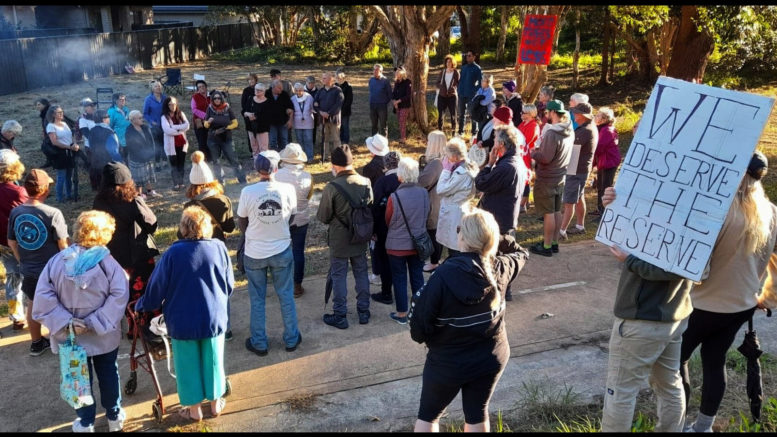 This was how one resident described Blackwall Reserve in their objection letter to council, trying to save the site from development.

Lots 23 and 23A Memorial Avenue, Blackwall are on the Council list of tranche three assets for sale.

“Since the announcement of the planned sell-off of our Reserve, many people have visited and understood the importance of these beautiful trees.

“Not just for the wildlife or as a jigsaw piece in the fight against global heating, but as a breathing space for us,” resident Jane Hendy wrote.

The letter explained that nearby land was recently cleared to allow 12 dwellings to be built.

“One swamp mahogany was so massive it was estimated to have been 150 years old,” Hendy said.

“Let us hope that the builder allows for enough parking to avoid utter chaos in the unnamed, unlit and extremely narrow laneway.”

More than 270 people signed a petition to save the reserve.

• It is only a small area however, there are over 40 mature trees including Blackbutts, Melaleucas and Swamp Mahogany.

• These trees are remnant vegetation of the Endangered Ecological Community (EEC) existing across the road on Blackwall Mountain, the Narrabeen Coastal Blackbutt Forest.

• On Council’s website this Reserve is listed as a bushfire buffer Category 1. It is marshland, subject to flooding, and the lowest point in Blackwall.  Selling it for more high-density housing will lead to drainage and flooding problems affecting surrounding homes.

• There is no direct access to the Reserve except by a narrow, one-way, unnamed laneway.

• The Reserve is home to wildlife including microbats, flying fox, channel billed cuckoos, currawongs, magpies, native pigeons, blue tongue lizards, marsupial mice and more. The loss of this habitat will mean homelessness and death for many of these animals as this is the last piece of remnant level forest in Blackwall’s residential area.

• The neighbourhood surrounding the Reserve has been degraded by lack of planning, overcrowding, and neglect by Council.  The loss of our greenness, our breathing space, our views of amazingly beautiful trees, will be a clear loss of amenity to the area.

The petition asked: How will we wake up in the mornings without the kookaburra to sing Reveille?

With public submissions now closed on tranche three asset sales, residents across the coast now await the next step.

Council said only land classified as operational and zoned for the correct purpose of sale, will initially go back to Council for endorsement to sell.

That includes this reserve which is zoned general residential. It was acquired by council for road widening.

Council says the reason for sale was because the land was no longer required for road widening as this had been completed.

Council said the land would be better utilised as residential housing sites.

Spot us another $100M, Council

Be the first to comment on "“An oasis in a badly designed, malfunctioning desert of concrete”"