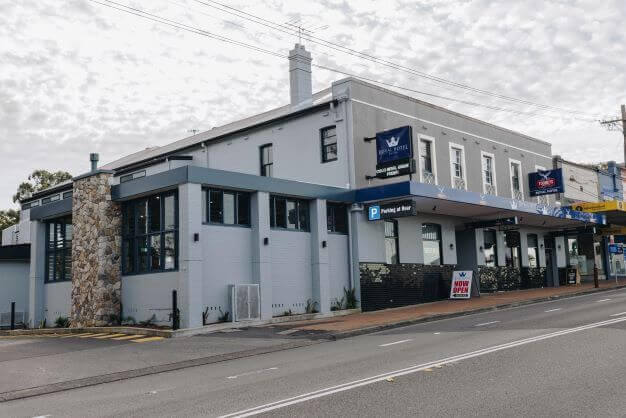 The Royal Hotel, an historic icon in Wyong, is about to undergo another update with alterations and expansion of the beer garden and outdoor area.

This latest plan for the 133-year-old hotel is the next step in the modernisation of the hotel that started in 2019 by owners Marney McQueen and Frank Arangio.

The hotel is within the Wyong Town Centre Heritage Conservation Area and requires development consent for any alteration or addition.

A proposal being considered by Central Coast Council includes construction of a new extended deck for the beer garden on the western side of the hotel, a new bar area, additional toilets, relocation of the children’s play area, installation of an external lift platform and 13 extra parking spaces.

The existing beer garden was built sometime after 1976 and doesn’t form part of the original building and it will be demolished to make way for the new outdoor area.

Proposed alterations will provide an extra 60sqm with a new deck and improve the flow between the main building and the beer garden by raising the floor level to match the bistro and dining/function area.

Accessibility was a major consideration in the design of the new beer garden and a new accessible lift adjacent the new outdoor area will significantly improve access from the rear of the property.

The beer garden will include a retractable awning and the existing sail will be relocated above the new children’s play area.

A Noise Impact Assessment set out a number of noise management controls to meet relevant noise impact criteria, such as limiting musical groups between 7am and midnight, monitoring noise level from speakers and limiting the number of people to 24 in the beer garden between midnight and 4am.

As the hotel is within the Wyong Town Centre Heritage Conservation Area, the merits of the proposal are being measured against the potential impact on heritage significance.

The aim is to conserve items and features that are significant and to ensure they remain recognisable of the period.

Over the years since the original timber Royal Hotel was built in 1889, it has been progressively altered, both inside and out, and very little of the original remains including the removal of the classic verandah when it was rebuilt in brick in 1919.

However, the basic form of the original building remains, notably the façade, which will remain unchanged.

A Heritage Impact Assessment concluded that the new beer garden and outdoor area would not adversely affect the heritage significance of the Conservation Area.

The development application (DA-1802) is on public exhibition for community consultation with Central Coast Council receiving submissions until July 29.