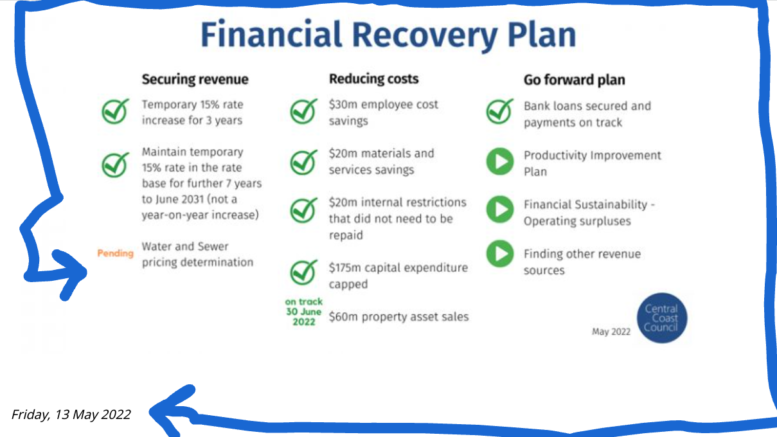 Central Coast Council has reduced the number of fleet vehicles from 1021 to 641 since 2018 as part of productivity improvements.

It has made annual cost savings since resuming management of three former YMCA leisure facilities in 2017 and it now has one library back-of-house location, instead of four.

Council-under-administration says it has met all milestones and targets in its Financial Recovery Plan that was put in place in late 2020.

“These actions have been taken to ensure Council’s ongoing financial sustainability,” Council said.

“The focus of Council is now on consolidating and improving the performance of the organisation.”

Council said everything possible had been done behind the scenes to reduce costs and minimise service reductions to the community.

“This includes a focus on productivity improvements which should have been realised as part of the 2016 merger of Gosford and Wyong Councils but were not, such as improving internal systems, processes, equipment and better management of staff time,” Council said.

“Some of these productivity improvements will continue to have an ongoing positive impact on improved service delivery and the community will see the benefits year on year.”

Council has produced a Productivity Improvements Fact Sheet which outlines the measures implemented to manage costs including significant staff reductions, restrictions of spending and reducing capital works programs (such as infrastructure and IT systems); and selling property assets.

Council said it has taken decisive actions in a short space of time since uncovering its financial problems in November 2020, including obtaining emergency bank loans to reimburse the restricted funds that had been spent “unlawfully on projects that the community had benefited from”.

“Productivity improvements have also been made through better management of staff time, purposeful equipment to help staff do their job efficiently and our technological progression coming to fruition with our staff benefiting from using upgraded technology systems and transitioning manual processes into digital ones.

“This means we have stopped some clunky and inefficient processes,” Council said.

It said that some of the productivity gains will continue to have an ongoing positive impact on improved service delivery and the community will see the benefits year on year.

“In a nutshell, we continually strive to be more productive, so we can use those ‘saved hours of staff time’ to deliver an improved service level for our community,” the Council said.

Improvements scheduled over the next three years include a ‘one theatres’ management model being investigated for efficiencies, instead of three council theatres managed differently; a one public tree service system with consistent procedures and timeframes instead of two current systems; one outdoor dining application and management process to replace two processes; consolidating a number of aspects of road, drainage and pavement design and overall management to create efficiencies in staff time.