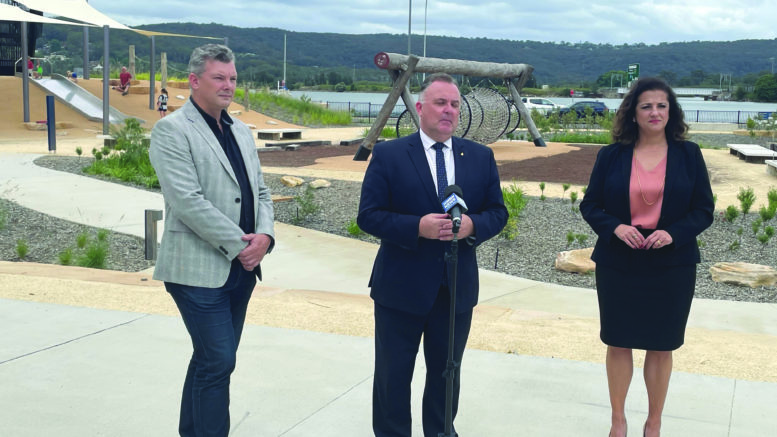 The Plan was launched on December 6 at Gosford waterfront by Parliamentary Secretary for the Central Coast, Adam Crouch, along with Business NSW Central Coast Regional, Director, Paula Martin, and Chair of the Central Coast Chapter of Urban Development Institute of Australia (UDIA), Caine King.

Giving a vision for the next 20 years, the Plan focuses on what it calls a “15-minute region” taking a holistic approach to neighbourhoods to ensure that planning, jobs, infrastructure and housing decisions are co-ordinated with the aim of providing everything residents need within a 15-minute walk, cycle or drive from their home.

But the Central Coast Friends of Democracy (CCFoD) and Central Coast Community Better Planning Group (CCCBPG) claim the document “looks to have been written by developers for developers and to benefit developers”.

“Not only does the draft plan look to allow unlimited development and growth at the expense of local communities and the environment, it has also been released for public comment just before Christmas when residents and community groups take a well-earned break,” CCFoD Director, Jane Smith, said.

The Regional Plan is a 20-year land use plan required to be prepared for each region with the NSW Planning website indicating extensive community consultation with a “broad range of stakeholders” had been undertaken.

But Smith said NSW Planning confirmed that the “broad range of stakeholders” largely comprised state agencies and groups representing the interests of developers.

“We are calling on the NSW Government to release the details of how this draft plan was developed – including minutes of stakeholder meetings and who attended.”

Central Coast Community Better Planning Group Chair, Gary Chestnut, said there was is a distinct lack of trust in the Government’s intentions in the plan.

“The current Central Coast Regional Plan that was developed in 2016 involved a number of community workshops leading up to the draft being released, including with youth,” he said.

“This document has been written with the strong influence of the development industry, released for community comment just before Christmas and has no face-to-face community workshops scheduled.

“Our community needs to be driving the 20-year vision for our region – not developers and vested interests.

“We are inviting local resident groups, community organisations and informal neighbourhood groups to contact us to organise a two-hour workshop about what is being proposed, their local community priorities and how to have a say.”

Chestnut said time was running out with comments on the plan set to close on March 4.

For more information or to arrange a local workshop – email: admin@ccfriendsofdemocracy.com.

The Plan is available for viewing at https://www.dpie.nsw.gov.au/centralcoast2041.