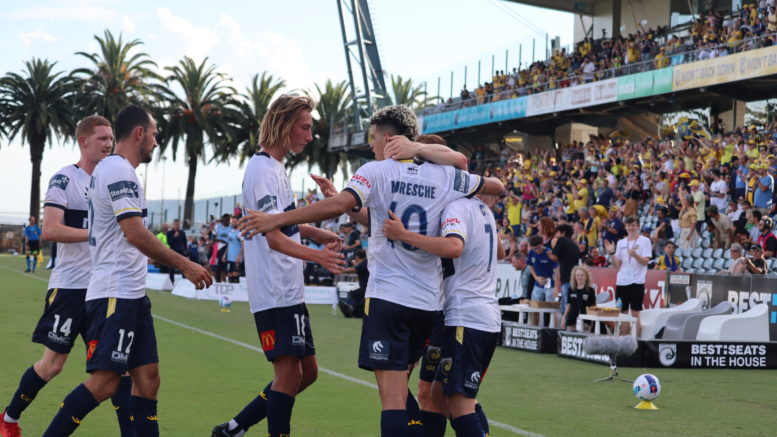 The Central Coast Mariners at a recent home game in Gosford.

The new year brought an unexpected break for the Central Coast Mariners due to the emergence of Covid-19 throughout the camp in late December, 2021, but the squad is hopeful for a return to the A-League in this weekend’s home field clash against the Newcastle Jets.

Since defeating the Leichhardt Tigers in the FFA Cup Quarter Final with a mighty 6-0 thrashing on December 21, three Mariners’ A-League matches have been postponed.

These include the Wellington Phoenix and Macarthur Bulls clashes at Central Coast Stadium on December 27 and 31 – the latter of which also disappointing with the cancellation of the New Year’s Eve 9pm fireworks – as well as the away fixture against Brisbane Roar on January 9.

Now the Mariners are hopeful for the green light to play the Jets on Saturday, January 15 at Central Coast Stadium, a game that would end an uncertain 25 days without a match, mid-way through the season.

The cause of the postponements is the thorn in the side of all A-League clubs presently – as well as in the country as a whole – and the 2021/2 season will continue with the indefinite threat of further COVID-19 interruptions.

Since the club announcing that an excess of 10 positive COVID cases had been confirmed on Wednesday, December 29, Mariners Head of Football Ken Schembri announced the peak number of positive cases as 14 players and eight staff members, as of Thursday, January 6.

The club confirmed there have been no hospitalisations nd many players and staff reporting no, or very mild, symptoms.

“It has been a tough period for not just the club but all of the Central Coast I feel and over the Christmas period,” Schembri said.

“Following the confirmation of multiple positive cases, we had the Centre of Excellence fully cleaned and disinfected.

“Along with this, upon the return to training, players who have yet to test positive to COVID-19 complete Rapid Antigen Tests every day on arrival.

“Outside of training, players are limiting social behaviours and attempting to avoid high risk settings.

“We are looking forward to our return to football in mid-January and we really would like our fans to all come along and support our squad.”

According to Mariners Chief Executive Officer, Shaun Mielekamp, the Australian Professional Leagues (APL) have ruled that any club with more than five unavailable players on the team list will be given the choice of postponing an upcoming match.

There is confidence within the club that this weekend’s F3 derby will go ahead as scheduled but will depend on whether both clubs can field a team.

Mielekamp also raised hopes that the Macarthur match fireworks missed at 9pm on New Year’s Eve may be part of the match against the Jets.

In the mid-week build up to this weekend’s fixture, squad members with a confirmed negative status were back training at the Tuggerah Centre of Excellence preparing for the resumption of their season, which currently sees them sitting fourth on the ladder.