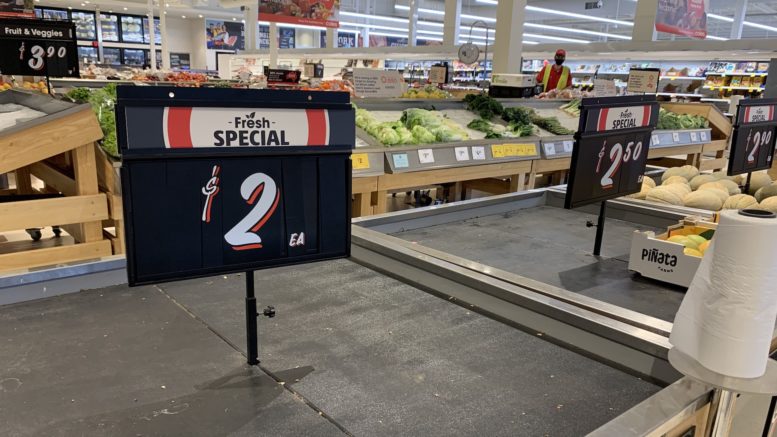 Coles at Lisarow had low supplies of fruit and vegetables.

Central Coast residents will have noticed a lot of empty supermarket shelves in recent weeks – but this time it’s not due to panic buying.

The Transport Workers Union (TWU) says the empty shelves underscore the Federal Government’s failure to provide Rapid Antigen Tests (RATs) for transport workers, with up to 50 per cent of truck drivers absent due to COVID-19.

The National Cabinet removed the requirement for truck drivers to have rolling seven days tests on January 6 but the move could be too little too late, with the TWU saying the country’s supply chain is under significant pressure.

TWU National Secretary, Michael Kaine, said reports of empty supermarket shelves across Australia was a predictable outcome of the Government’s failure to prioritise rapid tests for the country’s most mobile workforce.

“The union has been told by large transport operators working out of major Australia ports that between a third and half of their workforce are missing each day,” he said.

“The TWU wrote to the Prime Minister in October urging the Government to provide rapid tests to road transport workers to avoid unnecessary delays and keep drivers on the road.

“Instead, we have a completely predictable scenario where drivers are delivering rapid tests to be sold on the shelves of supermarkets and pharmacies – but they, like most Australians, can’t access them themselves.”

Kaine said road transport is Australia’s most mobile industry and interstate truck drivers are at increased risk of virus exposure.

“The TWU and Australian Road Transport Industrial Organisation (ARTIO) have been calling on the Federal Government to implement a COVID-Safe National Transport Roadmap with rapid testing at its heart to combat the risk of COVID spreading across states and territories as other restrictions are eased,” he said.

“These tests are an important weapon in the fight against the virus, and without them, the virus is hitching a ride through transport supply chains, putting workers and the industry in danger.

“It’s always too little, too late with this government.

“It is vital that rapid tests are free and readily available.

“The Government must prioritise access to transport workers and their employers who the community is again depending upon to keep Australia moving safely.”