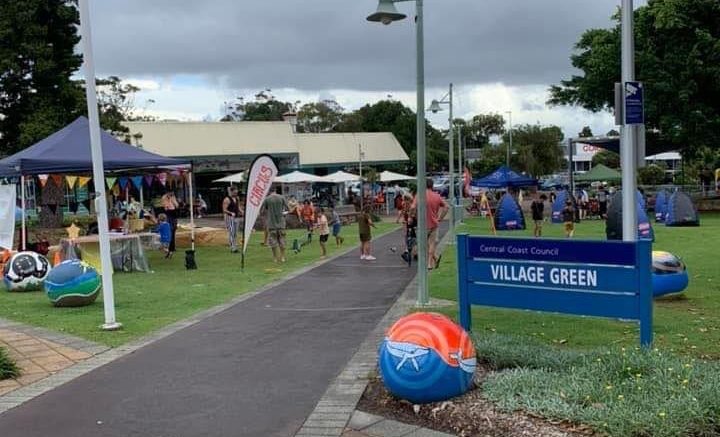 Toukley Markets are bustling once again thanks to a boost and a steadfast commitment from its new operators, The Toukley Lions Club.

The weekly Sunday markets, which take place at the Village Green, attracted more than 35 stallholders when they returned at the beginning of January, marking it out as the largest community market event at the northern end of the coast.

It was only the third outing for the 50-year-old markets, after they came into the hands of the Toukley Lions Club.

Participation in the markets – both from stallholders and the public – dropped dramatically in the 15 months to December last year when ownership of the markets was transferred to privately-held company, Organic Food Markets, by the Council.

Reports from former stallholders and locals say that stallholder fees sometimes increased to up to $60.00, which was untenable for a market that had been largely supported by an older community.

As with all events, it was also hit by both COVID-19 lockdowns.

Locals were determined to retain the traditional markets, despite waning interest.

Among those locals were Janet and Jeff Holmesby.

Janet was formerly Town Centre Manager for Greater Toukley Vision, the organisation that managed the markets until it was closed by the Council two years ago.

Greater Toukley Vision was a non-profit funded by a portion of the rates paid by local business owners. It supported local enterprises, community events, and reported on issues relating to roads, pavements and graffiti to the council, among many other matters.

The markets attracted upwards of 80 stallholders each Sunday when organised and supported by Greater Toukley Vision.

When the arrangement between Organic Food Markets and Council came to an end, Janet and Jeff joined forces with Toukley Lions to rescue the markets and give them a new lease of life.

Janet explained the Lions were able to make a successful tender for the operation of the markets, even though they were knocked back on one occasion and were required to submit further evidence to support their intentions.

The tender was won prior to the 2021 lockdown, however, it was not until December 19 that Janet, Jeff and the Lions team were able to stage the refreshed event for the first time.

The involvement of the Lions marks the first time that the stallholder fees raised by the event, after costs, will go back into the community.

The most recent Sunday event attracted more than 35 stallholders ranging from clothes to crafts and second-hand goods. The Village Green, despite the effects of the pandemic, was well attended.

“On the first Sunday of the year we hosted a kids’ day with Jamus The Magician and free face painting.

“It is great to see all the community supporting and welcoming back the traditional markets,” said Janet.

Cafes K-Cee’s, Blu-J’s and Fillippos were open for those to enjoy breakfast or morning tea.