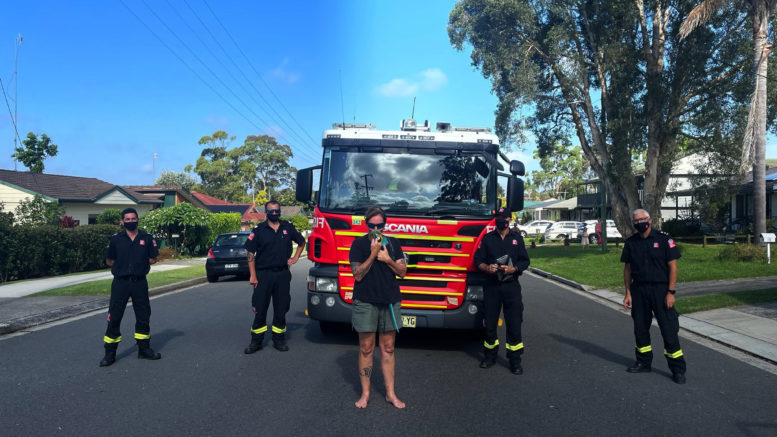 A Fire and Rescue NSW (FRNSW) crew has pulled off an unusual rescue, luring a lost Macaw down from a power pole and into its owner’s arms at Bateau Bay on Monday, January 17.

Twelve-month-old Chelsea, a blue and gold Macaw, had flown the coop from her outdoor aviary on Friday afternoon.

The bird’s owners, Cate and Kellie, placed a plea for help on a Facebook community page and spent most of the weekend racing around their suburb in a car, in a canoe and on a bike chasing sightings.

Ultimately, Chelsea was discovered 35 metres up a gum tree about 4.15 yesterday afternoon, a suburb away at Berkeley Vale.

The pet, which was just learning to fly, was scared, spooked by other menacing birds.

Uncertain how to resolve their ‘parrot-ox,’, Kellie gave her local fire station a call.

The intrigued Berkeley Vale crew travelled to the scene and discovered the Macaw had shifted to a nearby power pole.

The concerned firefighters then hatched a plan to retrieve the bird, placing a cut-up apple on the roof of the fire truck, clearing bystanders away and encouraging Kellie to call out to the bird.

Ten minutes later, the owner reached out and the exhausted bird literally flew into her waiting arms.

The owners and local community were rapt in the result.

“If it wasn’t for the Fire and Rescue crew, honestly…I don’t think we would have got her back alive,” Cate said.

“We used the fire truck as the stepladder we needed to get the bird down.”

The FRNSW was happy no feathers were ruffled in its first ever Macaw mission.