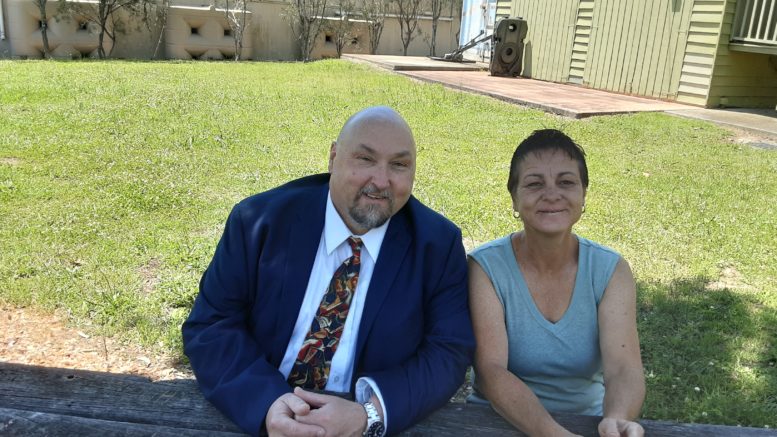 Candidate for the seat of Robertson, Jeff Lawson, with Traditional custodian, Tracey Howie.

The Indigenous-Aboriginal Party of Australia is calling on the Federal Government to declare the Kariong Ridge area, from Staples Look Out to the Kariong hall, as sacred National Heritage lands.

The party’s candidate for the seat of Robertson at the next Federal election, Jeff Lawson, and Party convenor Uncle Owen say the government needs to “lift its game” in a number of areas.

“For starters, we believe many Australians would be happy to have the date for Australia Day changed,” Lawson said.

“Why not a plebiscite to find out?

“It was good enough for gay rights, why not Indigenous rights too?”

Lawson said an overhaul of the Land Rights Act is also in order.

“Traditional Custodians, the true keepers of lore, are being ignored and Lands Councils are being turned into real estate offices,” he said.

“Afraid of government, many just do as they are told for fear government will find a way to shut down all the Lands Councils too.

“They have no trouble shutting down Indigenous legal services or cutting back on Indigenous medical centres.”

Lawson said one way to get back on the right track would be to declare the Kariong Ridge area, from Staples Look Out to the Kariong hall, as sacred National Heritage lands.

“This area is brimming with sacred sites and Indigenous artefacts,” he said.

“It would be a terrific boost for tourism on the Central Coast to protect these lands.

“Some have been developed but much could be saved.

“The Kariong Ridge would become a great asset for Indigenous and non-Indigenous Coasties – something to be very proud of.”

The Party has called on Member for Robertson, Lucy Wicks, to support the proposal.

“We are desperate for Indigenous youth headspaces on the Central Coast too,” Lawson said.

“Youth Suicide for Indigenous kids is double the rate for non-Indigenous youth and we must do something to stop this.

“Federally funded headspaces, manned by Indigenous staff, must become a reality on the Coast.”

A spokesperson for Lucy Wicks said she had not yet received a formal proposal from the Party.