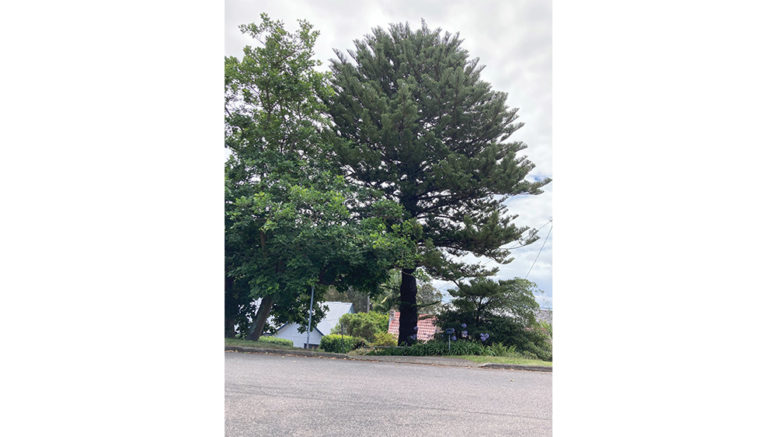 A 60-year-old Norfolk Island Pine tree that residents successfully petitioned to have placed on the significant tree register only last month is destined for the chop if a newly lodged residential DA is successful.

The Norfolk Island Pine tree, which sits on the public footpath outside 11 Trewlawney Street, Killarney Vale, is one of only 11 Norfolk Pines on the Coast that have made it onto the significant trees list.

The DA (DA/1508/2021), which has attracted more than 60 objections – a number rarely seen for a tree on public land – requests that the tree is removed from the front of the property to make way for a new driveway that will service a knock-down rebuild, right on the shores of Tuggerah Lake.

The existing driveway is a right of carriageway between numbers 11 and 13 that slopes down approximately 15 metres before splitting into two T-junction parking spots.

Lodged on October 22, the DA cited a private arborist’s report.

Council initially knocked back several requests to make this report available to the public, however, with only six days to go before public exhibition closed, it was finally uploaded to the planning portal causing dismay and frustration among residents.

Objectors argue that by the time the private arborist’s report appeared they had already made their submissions, depriving them of vital information that would have influenced their case for the tree to be saved.

The Pine was granted a place on the Council’s significant tree register in early October on account of it meeting a combined set of criteria.

That criteria included: outstanding visual or aesthetic significance; significant ecological value; historical and commemorative significance and social significance on account of the 32 local individuals and families who signed the petition to have the Pine recognised.

A local landmark, the tree enjoys a healthy 20-plus metre height with a girth of over 3.2 metres, according to the Council’s register.

It is visible across much of Tuggerah Lakes and is known for providing a beacon for watercraft on the lake.

Residents are concerned that their efforts to have the tree listed will be in vain following the lodgement of the DA.

“Our family joined a large number of local residents to petition the inclusion of this extremely healthy Norfolk Island Pine tree on the Significant Tree Register.

“We were elated when the Council agreed to its listing,” says Killarney Vale resident William Walter.

Residents believe the applicant of the DA is ignoring what could be a win-win for everyone.

“Most letters of objection are asking the Council to work with the developer on a win-win situation where the development is set back six metres from the tree to save it.

“It’s not a big ask given the 45 metres-plus depth of this block,” said one neighbour.

One of the biggest concerns is that the private arborist report conflicts with the Council’s own report, where there is a discrepancy between the age and height of the tree.

Equally concerning for residents is that the private report states that there is a sewer main within four metres of the tree and that Hunter Water deems Norfolk Pines to be severely damaging to water pipes.

Ultimately, despite the report grading the tree as being of ‘medium significance’, meaning that its removal should only go ahead once every other avenue is exhausted, the conclusion is that redevelopment of the site will destabilise the tree and its removal is necessary for the knockdown-rebuild to commence.

Petitioners are exasperated and argue that a driveway already exists.

They say that making way for a new 15-metre driveway is superfluous.

“To cut it down for a second or an additional driveway onto a 15-metre frontage property would be environmental vandalism of gross proportions,” noted Berkley Vale resident David Piper.

Meanwhile, the history of the tree’s planting has become something of folklore in the local area.

“When we first moved in, our neighbours told us the tree was planted in the late 1950s by the then Wyong Shire Council after a truck runaway incident that ended with it nose down in the slope,” recalls Merlene Thrift.

Council is believed to have planted it to help prevent any future damage to properties.

Local birds, including Tawny Frogmouths, and Brush Tail Possums are known to inhabit the tree.

It is believed that the DA’s applicants have offered to replace the Norfolk Island Pine with two new trees but this offer has not been received well.

“Two new trees, to compensate for the removal of this tree, would take more than two generations to reach the current environmental value of this landmark Norfolk Island Pine.

“By that time we may not have any Brush Tail Possums or Tawny Frogmouths in the neighbourhood.

“We need a win-win in here, not a zero-sum game,” said David Piper.

Council documents state that the Significant Tree Register largely identifies significant specimen trees, or those that present significant amenity values for public recognition and appreciation, while it is not intended to provide any additional legal protections over the trees contained within it.

The Council’s planning portal is closing altogether from December 9 until December 20, during which time no applications can be viewed.