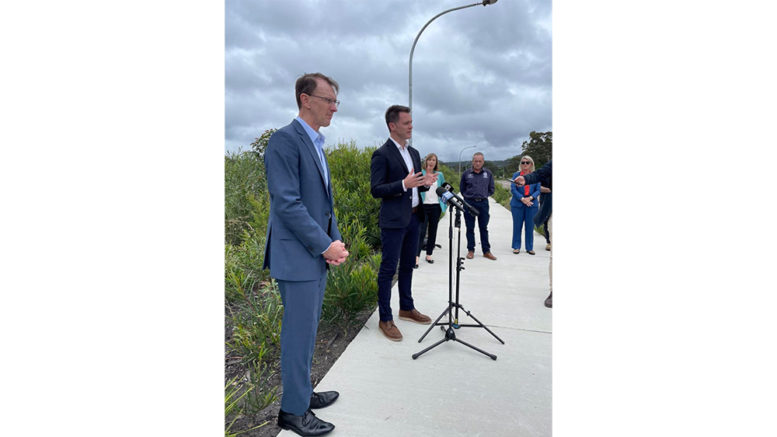 Domestic manufacturing was the focus of a recent meeting outside the Kangy Angy Maintenance Facility when Central Coast Labor MPs joined by NSW Leader of the Opposition, Chris Minns, and representatives from local unions to discuss the new intercity trains delay.

The NSW Government is currently facing an 18-month delay to the remainder of its $2.9B fleet of new intercity trains due to production problems.

The fleet was announced in 2014 with plans to carry passengers on the Central Coast along the Sydney to Newcastle line by 2019.

Transport for NSW has confirmed they now expect delivery of the trains to be completed by mid-2024.

“This government has not provided one manufacturing job for the Coast – the people working in there were transferred from the Broadmeadow site.

“The 300 jobs that the government promised are in Korea.

Member for Wyong and Shadow Minister for the Central Coast, David Harris, said thousands of local commuters were missing out due to the delay.

“Our commuters are the ones who are the taxpayers that are paying for theses substandard overseas built rolling stock that have to be fixed, modified, changed when they get to NSW, simply because the government has not done their homework up front,” Harris said.

“And quite frankly, the taxpayers on the Central Coast are quite sick of being duped by a government that isn’t committed to them.

“They’re committed to dollars and cents, and not actually the people who use these services every single day.

“It’s time for the government to get off its high horse and actually start delivery for people in NSW, like the people of the Central Coast with assets that actually work. Because these people rely on it.”

Shadow Minister for Transport, Jo Haylen, said a range of defects had been identified in the new fleet.

“First of all, they didn’t fit the tracks or the tunnels, then we’ve heard serious safety concerns from the union about the diminished role of the guards that are there to keep passengers safe, as well as poor CCTV reliance, as well as the doors impinging on that footage,” Haylen said.

“Then a secret report by the government showed that the doors on these InterCity trains would flex outwards – would fall off and fail if they were to open or close at speed and what’s more,

“They’ll be over 18 months late, and the government says they can’t even fly in the specialist engineers to check them.”

Senior Vice President of the Rail, Tram and Bus (RTB) Union NSW Branch, Craig Turner, said the trains already in Australia will be ‘let out’ when the NSW Government’s addresses the safety concerns raised.

“The government came to the union years ago and said they were going to build a train, a new train for the inner-city network and that train would be built in South Korea,” Turner said.

“This union was up in arms from the start – all the trains previously, most of the trains had been built in Australia.

“But what they did was they put it off to a third-party rail connect.

“That left the RTB out of everything … we had no input into the train at all.

“We’ve got a major safety concern with the train guards.

“We’ve fought this long and hard, for years. At the moment those trains are sitting in the facility.

“We will not let them out, it is about safety, and until the government can come to the stage, getting the guards to do exactly the same job they do today for the safety of the public, for the travellers of NSW, this union will stick firm.

“So as soon as the government sit down with us, gets this train out in a normal situation for the safety of the public, then the union will be happy.”

Minns said the delay is an example of the NSW Government’s opposition to domestic manufacturing.

“It’s well over budget. And it’s a common theme right here in NSW … transport infrastructure is either delayed, over budget or both. And right across the transport network at the moment, we’re seeing the fleet whether it’s ferries, light rail, or trains not fit for purpose.

“Now we estimate that 4,000 – 5,000 well paid jobs have been lost as a result of the NSW Government’s obsession with building overseas.

“But time and time again, we’re seeing budget overruns from the NSW Government with these projects, going well over budget, negating any of the savings.

“It’s time we rule the line in the sand and started backing Australian manufacturing.”