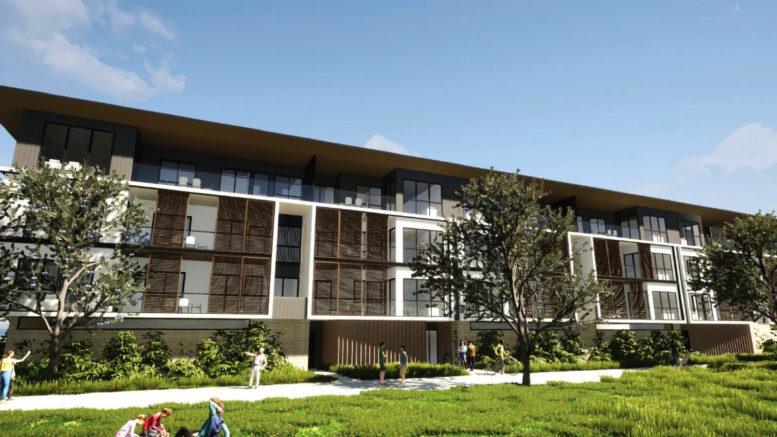 An artist’s impression of the proposed Nareen Gardens redevelopment

A large redevelopment of the Nareen Gardens Village at Bateau Bay has met with resistance from neighbours but those in favour say the plans will help meet the huge demand for suitable aged care accommodation.

The $148M redevelopment plans will quadruple the size of Nareen Gardens, an independent living and aged care facility at 19 Bias Ave, operated by Uniting Church of Australia Property Trust.

Neighbours of Nareen Gardens, in the newly-formed Bateau Community Collective, say they’re not opposed to any redevelopment of the site, however they believe that any proposal should be consistent with the existing low density scale of the area.

In their submission opposing the proposal, they say that any plans should avoid impacts on surrounding residents, rather than trying to justify impacts, to maximise redevelopment potential of the site.

Spokesperson for Bateau Community Collective, Erin Breneger, said they were also worried for the residents of Nareen Gardens.

“Some residents I spoke to, they are just distraught, they are scared to speak up, but their voice isn’t being heard.

“Some of the residents bought in only 12 months ago and didn’t know that their homes were going to be demolished and that they’d be forced to move somewhere else, let alone into a four-storey apartment.

“These people have been an integral part of our community for the past 50 years and will continue to be but putting them into four-storey apartments will basically shut them off from the community.

“They’ve got the most beautiful gardens and they all sit outside their little homes and chat to each other, and to think they are going to be knocked down, it’s just heartbreaking,” Breneger said.

She said the first time most of the neighbours knew of the development application (882/2021) was when it was placed on public exhibition, there was no community consultation, they were unaware of the design planning and were not asked to voice any issues they had.

Uniting’s redevelopment plans will quadruple the size of Nareen Gardens to accommodate more than 400 people on the 3.7ha site.

The plan is to demolish the existing 62 single-storey buildings which currently include 114 independent living units, office and community centre.

It also plans to build one, four-storey residential aged care facility with 160 beds on the first two levels and a further 40 independent living units on the top two storeys.

There will also be a range of community facilities including a chapel, café, hair and beauty salon, multi-purpose space, indoor swimming pool, club/community room, seniors’ gym, cinema, a village green, barbecue are and children’s playground.

The project would be staggered over four stages with the demolition of 43 units and the construction of 84 new units done first.

They engaged professionals, SKM Planning, to prepare a submission on their behalf, to be presented to the decision makers, Hunter Central Coast Regional Planning Panel.

The comprehensive 33-page submission says the proposal lacks merit, has unacceptable impacts on neighbours and the broader Bateau Bay area, and as such should be refused by the Panel.

It said in the submission that there were too many significant issues and detrimental impacts on surrounding residents that needed to be addressed in a revised proposal.

Main objections were the bulk, scale and density causing an unacceptable and significant decline in standard of living for neighbours through the loss of privacy both visual and acoustic, over-shadowing, traffic and pedestrian safety, loss of vegetation as well as security and flood lighting all becoming a problem.

Residents say the overall density of the development is inappropriate and unsuitable for the locality and will result in a dramatic change in the landscape, particularly when viewed from Lakin St, Altona Ave, Bias Ave and surrounding streets.

This type of “vertical village” is suited to high density city or inner-city locations, not a coastal village setting such as Bateau Bay, the submission said.

Residents have raised environmental matters such as potential pollution risk in the treatment of acid sulphate soils, the removal of a vegetation buffer between the Bateau Bay Sewer Treatment Plant which could cause an increase in odour, and the loss of 90 of the 216 trees on site and the possibility of another 43 during earthworks.

The benefit of the mature trees to wildlife and the neighbourhood cannot be compensated by the purchase of biodiversity credits off site, as suggested in the DA, and cannot be replicated with the proposed screening shrubs, the submission said.

It referred to the Bateau Bay Town Centre Plan which identifies this area as habitat for the critically endangered swift parrot.

SKM Planning noted that the proposal does not satisfy the objectives of the Wyong Local Environmental Plan nor the Development Control Plan, it falls short of the relevant Land and Environment Court planning principles and any redevelopment should be assessed against the New Housing SEPP.

Apart from the SKM Planning submission on behalf of the Bateau Community Collective, so far there are 38 individual objections plus a petition containing 424 signatures.

The only public submission in favour of the proposal said there was a huge demand for suitable aged accommodation with many elderly people “making do” with limited services, generally leading to the deterioration of their health.

“As both the home support program and home care packages struggle to keep pace with demand, the level of need for residential aged care beds and independent living units will also increase,” the supporting submission said.

“When I read of neighbouring residents’ alleged fears of impacts regarding noise, pollution and privacy, I hope that they will also broaden their thinking to acknowledge the current and ongoing needs of the ageing population on the Central Coast.”

A Social Impact Assessment with the DA says that overall the proposal should have an overwhelmingly positive social impact, given that it increases the supply of dwellings specifically designed for seniors in a highly accessible and engaging environment, by more efficiently utilising the site.

The SIA says that prior to lodgement of the DA, Uniting had undertaken carefully planned community engagement including consultation with relevant stakeholders and community representatives, existing residents and neighbours to identify issues and any affected groups with regard to social impact.