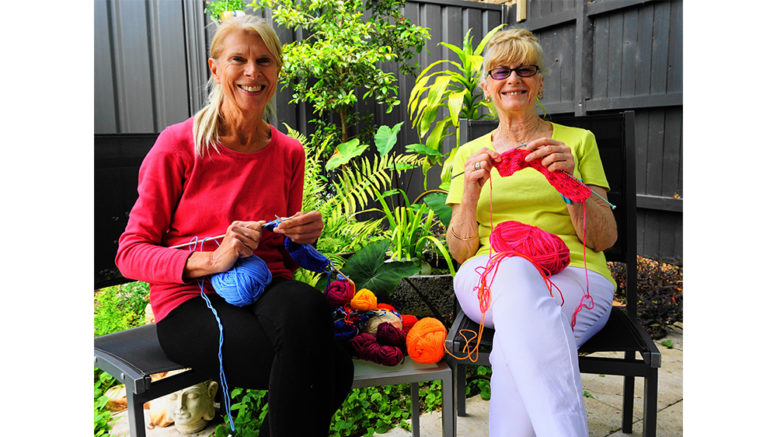 A group of Central Coast women has come together to knit for climate action, crafting scarves that represent the average global temperature from 1919-2019.

The group are a part of the nationwide initiative called Common Grace, a movement of Australian Christians who are fighting social injustices in the community.

Halekulani based member, Sandy Green, said the local group had created and sent out scarves to politicians to
start a conversation about climate change.

“A number of Central Coast knitters responded to Common Grace’s call to draw our politicians’ attention to our rapidly warming world.

“There were at least 11 other people knitting scarves on the Central Coast.

“Recently Kerry Kable, Joy Dyer, Rosie Shorter and I met online with Federal Member for Shortland, Pat Conroy, and NSW Senator, Deborah O’Neill, to discuss the significance of the scarves.

“They both expressed their appreciation for the gift and supported the call for action on climate change.

“Knitting my scarf, which was sent to Mr Conroy, really brought home to me the rate at which our planet is warming.

“I am passionate about ensuring the future of our planet for my grandchildren, but as I knitted each band of colour, starting with dark blue which represented the average global temperature in 1919, then from blues to yellow, pink and finally dark red representing the temperature in 2019, and I was tragically reminded that our Earth is warming at an alarming rate,” Green said.

Another member, Kerry Kable, said she shared her passion for the environment with her grandchildren.

“Even though I don’t love knitting, I was given needles, wool and encouragement.

“I took my efforts to Mackay when I visited my little grandchildren earlier in the year.

“Six-year-old Evie made one stitch after another… it was a moment of shared love for each other and this Earth.

“The label on my completed scarf, showing our name and password read, Made by Kerry 2251 and Evie 2740,” Kable said.

The group sent Federal Member for Robertson, Lucy Wicks, and Member for Dawson, George Christensen scarves but did not receive responses from the MPs.

Politicians who received a scarf were also requested to wear them on the last day of sitting in Parliament on October 21.

Common Grace is an online Christian movement for justice that aims to inspire and organise Australian Christians.

Their campaigns aim to resolve social justice issues including Aboriginal deaths in custody, working towards a treaty for Reconciliation Week, Addressing climate change, campaigning for the end of detention for refugees and asylum seekers, as well as calling for better funding and more effective policies to address domestic and family violence.

Leila says she is fighting for her future