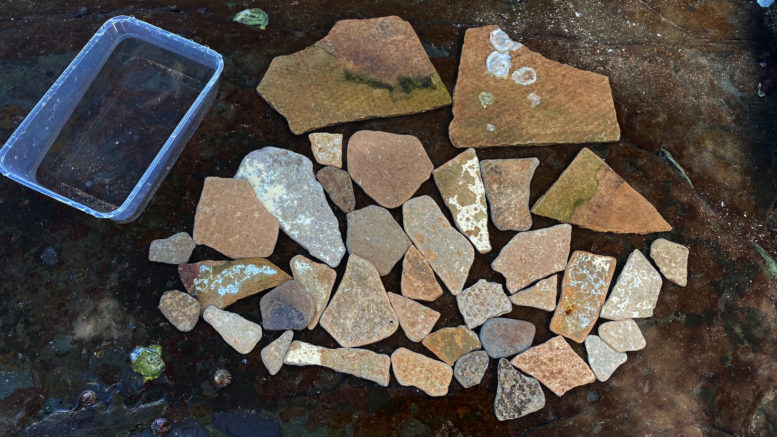 Some of the asbestos pieces collected by the concerned resident

Central Coast Council is urging residents to exercise caution and report any suspected asbestos containing materials found on beaches or other public open spaces after a resident found more than 75 pieces of the dangerous material at Terrigal over a two-month period.

The resident, who did not wish to be named, is urging Council to conduct more regular checks of beaches and erect signs warning the public of possible asbestos deposits.

She collected the asbestos on Terrigal beach and on rocks on the Avoca side of The Skillion, concerned for the safety of the general public and especially children.

“As the mother of young children, I could not leave the asbestos lying around,” she said.

“I am afraid families might not be aware of this danger on our beaches.

“It is really risky for people’s health.

“The first time I saw asbestos pieces was last year – I saw around 12 pieces and called Council on a Friday, but they did not arrive until about the following Tuesday, by which time they found only four pieces.

“Because of this experience, I decided to collect it by myself in the most safe way.

“I was wearing a mask and putting the asbestos into a hermetic container with water in it.

“This is somewhere I take my children often and I was not aware of the risk.

A spokesperson said Council has a Risk Management Plan in place and follows up on any reports.

It regularly undertakes inspections at a number of beach and waterfront areas across the Coast as trained staff work with experts to remove and dispose of asbestos containing material safely, the spokesperson said.

“We have undertaken previous assessment of the Terrigal coastal areas, and despite fragments occasionally washing up on the beach, the air quality monitoring detected no airborne fibres in the location.

“Council understands and acknowledges community concern about any asbestos containing material appearing to be washed on shore; however, we want to assure the community the risk to public health is considered low.

“This is due to the size and nature of the material and that it is bonded in sheet form as asbestos is dangerous only when broken up and fibres are released into the air.

“In 2020 more than 720 fragments were removed from Wamberal Beach following a series of significant weather events.

“Whilst the original source (is still not known), we know it’s a legacy issue from past prevalent and ill-informed use of asbestos as a building material.

Suspected asbestos containing materials found on beaches or other public open spaces areas should be reported to Council on 1300 463 954 or online at Council’s 24/7 customer service portal; or to the EPA Pollution line on 131 555.

More information on asbestos containing material including Council’s Asbestos Management Policy can be found at centralcoast.nsw.gov.au.

Can the Coast become a certified ECO Destination?

All council toilets should have hand cleaners