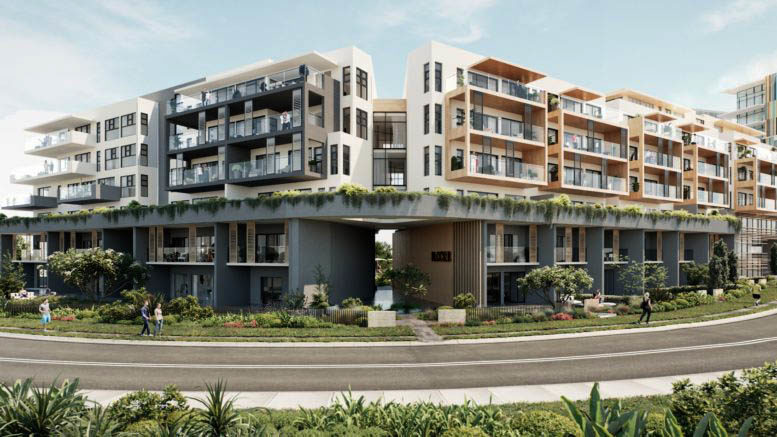 The proponent of a $110M residential project planned for 89 John Whiteway Dr, Gosford, has lodged a response to submissions received during its exhibition period as it progresses through the Department Planning for consideration as a State Significant Development.

The Community Environment Network (CEN) says suggested modifications of the proposal do not go far enough to address concerns relating the bulk of the development, tree removal and effects on vegetation, although it welcomed key amendments which include the reduction in the building height, from between six and 12 storeys to between five and nine storeys, and a reduction in the number of apartments from 260 to 204.

In response to traffic concerns, the proponent said proposed driveways are designed in accordance with relevant Australian standards to ensure safety is maintained.

“Traffic movements and their effects (noise, pollution, light spill) from the site are typical for vehicle movements that occur elsewhere within Gosford City Centre,” the response says.

“The proposal has provided appropriate parking and also seeks to upgrade the footpath to allow residents to either walk or drive at their leisure.

“Vehicular entries have been selected to enable safe entry/exit for vehicles and in locations that will reduce the overall height of the proposal.

In response to noise concerns, the proponent said a detailed Noise and Vibration Impact Assessment had been submitted which demonstrates that the project can be constructed with appropriate and typical mitigation measures that will ensure noise impacts are managed appropriately.”

Regarding privacy issues, the proponent said the development is located over 63 metres from 91-95 John Whiteway Dr, ensuring visual privacy is maintained and overshadowing is not an issue.

“If suspected Aboriginal objects are identified during construction work should stop immediately and Darkinjung LALC, DPIE and an archaeologist contacted to identify and record the objects,” the response says.

CEN said it was still concerned that the loss of 606 trees will have a massive impact on the Gosford ridgeline.

“The sheer scale of this development means too many trees need to be sacrificed to make way for the construction footprint and meet the requirements of Planning for Bushfire Protection,” Chestnut said.

“Of the 830 trees surveyed within the site only 224 trees will be retained.

Chestnut said it was positive that the trees which have been given the highest priority for retention are the large and medium size trees which contribute most to the visual and biodiversity values of the site.

“This site is located on the ridge that connects to Rumbulara Reserve and is key to visual character of the city.

“A total of 21 hollows in seven trees are proposed to be removed and will need to be replaced with nest boxes suitable for large possums or gliders, small gliders or parrots and micro bats.

“So even though no species were found to be impacted by the removal of vegetation these creatures obviously depend on hollows on the site as habitat.

“It remains to be seen whether or not the retention of selected trees, rocky habitats and managed understorey vegetation within the northern areas of the site or replanting works will result in some connectivity remaining for species with nearby Coastal Open Space System (COSS) reserves.”

Government Architect to develop a framework for Gosford revitalisation