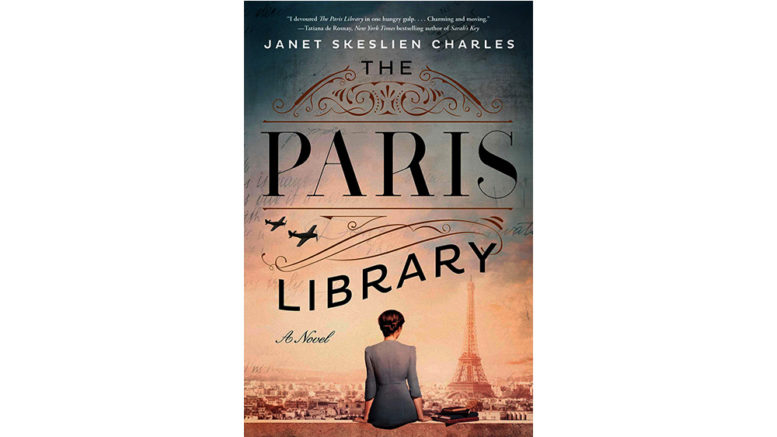 It is an actual library which was started in 1917 when books were donated and shipped from America to Paris so US soldiers could have reading material.

Ernest Hemingway, Gertrude Stein, Henry Miller and Edith Wharton were just some of the visitors to Paris at this time.

This story takes place during the German occupation of France in World War II.

Many of the events and secondary characters are real.

Odile Souchet lives in Paris in 1939 with her father, mother and her brother Remy.

Remy and Odile are very close and help buoy each other up when their father is being opiniated and domineering, which is most of the time.

Papa is high up in the local police precinct and is determined to set Odile up with one of his young officers.

He cannot understand why Odile wants to get a job at the library when she could just get married.

After 14 attempts, it seems that Paul, the latest police officer invited to Sunday lunch, is a keeper.

Oh, Odile also gets the job at the library.

Good thing for her she knows the Dewey Decimal system.

War starts and Remy enlists in the army.

The Directress of the library, Miss Reeder (seriously, that’s her name) is determined to keep it open.

Odile and her co-workers end up delivering books to those no longer allowed to borrow them.

To do this they will have to get through German check points and risk getting arrested.

Her relationship with Paul grows, they will get married when Remy comes home from the war.

She develops a close friendship with Margaret, the downtrodden wife of a diplomat and Bitsi, who is engaged to Remy.

Lily is a teenager growing up in Froid, Montana in the 1980’s.

She sets herself a school project to write about France and interviews her neighbour, Odile Gustafson.

Odile will be there to help Lily deal with the passing of her mother, her father getting remarried, and the usual teenage angst.

They will be close until Lily does some snooping which puts a strain on their relationship.

The story switches between Odile’s ordeals (that was fun to type) in Paris during the war to Lily’s difficulties of being a teenager in a small town.

Overall, I enjoyed the bulk of the book and learning about the American Library and how it played a part during the war.

I was also very eager, as you must be now, to find out how Odile Souchet in Paris ended up as Odile Gustafson in Montana.

However, when it was revealed it was extremely disappointing.

It felt like the author didn’t know how to work it out and came up with a story that didn’t quite fit the Odile I had just spent five hours reading about.

Also, while the bulk of the book is told from Odile and Lily’s perspective there are random chapters told from the perspective of other characters, which seemed odd and broke the flow (although it did make more sense after reading the author’s notes).

Oh, and I also had a hard time warming to Lily.