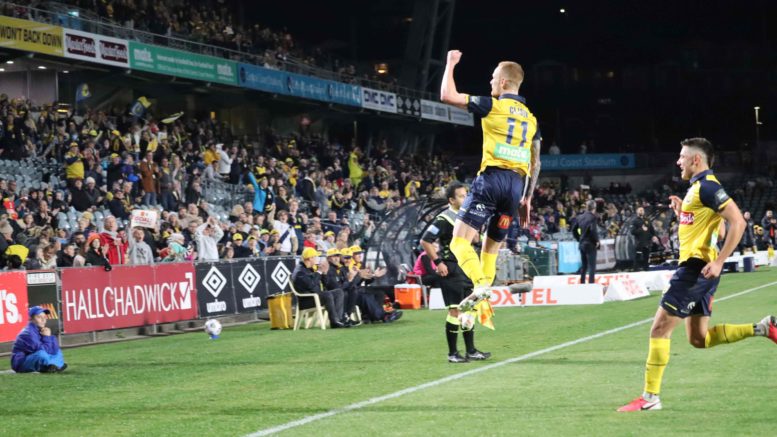 The Central Coast Mariners have secured a third place finish and home Elimination Round Final after a thrilling 2-0 win over Western United at Central Coast Stadium on Saturday, June 5.

It was an early goal for Jack Clisby that set them up for success, with a late second coming for Marcos Ureña to seal the win.

In chilly conditions, both sides played out their final round of the 2020/21 A-League campaign with the flow moving from end to end. With Tuesday’s disappointing performance to forget, Oliver Bozanic was set to lead the home side but pulled up with a niggle in the pre-match warm up.

The late change didn’t seem to disrupt the boys in yellow, who began to press early on, with their first major chance of the night coming from Alou Kuol in the sixth minute. From here, it wasn’t long until the visitors seemed to find their foot in the game with a 14th minute super strike from Tomislav Uskok.

Nonetheless, the momentum continued to build for the Mariners as they edged closer up the pitch. A cross in from Gianni Stensness in the 24th minute fell to Lewis Miller whose header was tipped over the bar with a fantastic save by Western keeper, Ryan Scott.

Only a minute later, the home side were rewarded for their efforts after another Stensness cross found Clisby in the penalty area. Clisby’s head was first to the in-swinging corner, although the ball took a couple of deflections before finding him again. A swift controlling chest touch preceded a low strike to find the bottom of the net.

With a lead established, the remaining 20 minutes of the first half continued with each side putting efforts into their counter-attacking movements. Former Mariner, Lachlan Wales, was subbed on for Western United soon after half-time following a collision on Dylan Pierias which resulted in the defender being taken off for medical treatment.

The danger of the Melbourne-side was never too far away, with Adisu Bayew slicing a shot across goal in the 57th, only to be denied by goalkeeper, Mark Birighitti, who dived on the line. It came along with a strong push for territory and possession by Western, making the Mariners work hard to preserve their lead.

With eight minutes of extra time added on, and the score line still racked at 1-0, both teams searched for anything to edge over the other. In the 96th minute, Marcos Ureña pounced on a stray ball in the box from Scott’s save, sealing the deal for his club.

Woy Woy local, Matt Hatch, developed the move from deep in his defensive half, gliding past three defenders to find the attacking space. His through ball found Ureña, who low-crossed the ball to debutant, Jing Reec. His first time strike forced the diving save from Scott and it was Ureña first on it, setting the end score at 2-0.

The win has cemented the Mariners’ final positioning on the A-League ladder at third place. This means they have not only made the finals but will host their first match against sixth place finishing Macarthur FC. It is the first time in seven years the Central Coast side has advanced to the finals.

Their Elimination Final challenge will go ahead at Central Coast Stadium on Saturday, June 12, kick-off 7:05pm.