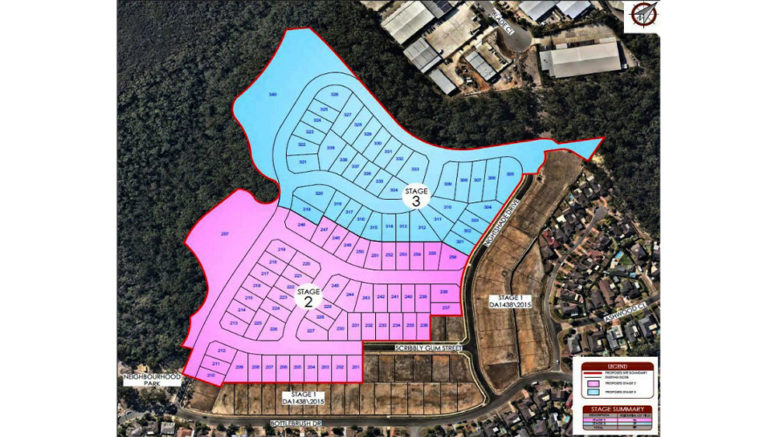 A $9M development of a 95 residential lot subdivision at Berkeley Vale has the green light after a Land and Environment Court determination.

The proposal finished up in Court as the applicant, GV Nominee No 1 Pty Ltd, appealed the deemed refusal by Central Coast Council.

The Environmental Planning and Assessment Act allows an applicant to take matters to Court within the first six months of lodging an application if Council hasn’t made a decision.

The proposed residential lots in stages two and three of The Glades housing estate at 5 Scribbly Gum St, will range in size from 451sqm to 1126sqm, with an average allotment size of 591sqm.

The Glades housing estate is about 2.8km south-west of Chittaway Bay, 2.9km from Berkeley Vale and 1.4km north-west of Glenning Valley and has an area of 9.499ha.

The land was rezoned for residential development in 2015 and when the first development application (DA) was lodged, a biodiversity assessment discovered a nesting White-bellied Sea Eagle on the property.

Plans were changed to accommodate a 250m buffer zone around the nest which took up some of the residential land.

Afterwards, the ecologists who were monitoring the eagle’s nest found it was no longer nesting there and it was an abandoned breeding site.

The applicant lodged a new DA (465/2020), modifying the previous approval, to be able to develop over that part of the land which had been set aside for the buffer zone around the eagle’s nest.

Along with the new DA, the applicant completed all biodiversity credits, which was part of the original development approval.

In the Court ruling by Commissioner Chilcott, it said he was satisfied the development would not significantly impact on the biophysical, hydrological or ecological integrity of the adjacent coastal wetland or littoral rainforest, nor the quantity and quality of surface and ground water flows to and from the wetland and rainforest.

Also, there is no evidence that core koala habitat exists on the site, the Court determination said.

The applicant said the proposed subdivision met the aims and objectives of the Central Coast Regional Plan and was in line with Central Coast Council’s plan for the further residential development of the area, consistent with Council’s rezoning of the land to R2 low-density residential.

“The social impact associated with the proposal is considered to be positive, bringing such benefits as an increased supply of new housing, creation of new neighbourhoods interconnected with walking and cycling facilities,” the report said.

The date of the Court determination was May 6 and consent took effect from June 2 when it was registered on the NSW Planning Portal.

Irresponsible dog owners need to know the laws they are breaking

Chamber of Commerce asks Minister not to reinstate councillors