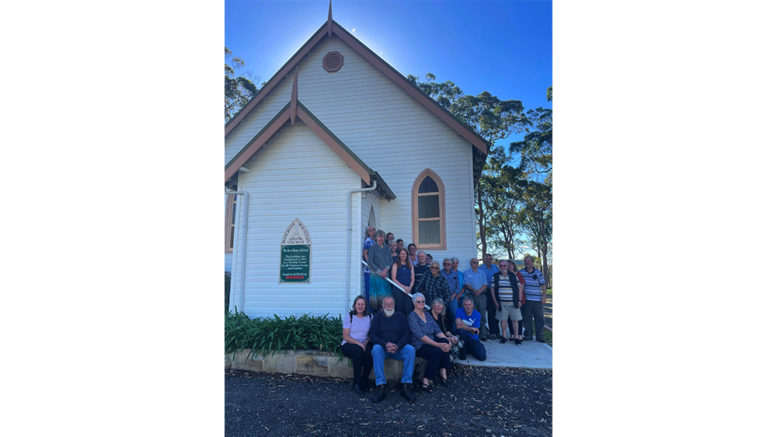 Residents of the Mangrove Mountain community have launched a petition in an effort to stop the proposed sale of the district’s heritage listed Union Church.

Situated at 2154 Wiseman’s Ferry Rd, the church property was purchased with a government land grant in 1910 and the church was built in 1911-12 after the local Christian community had raised sufficient funds to get the project underway.

The church has been operating since May 1912, primarily with the purpose of providing a place of worship for the district’s Christian community.

The church’s management board, the Mangrove Mountain Union Church Association (MMUC), has announced its intention to sell the church and nearby hall, citing falling congregation numbers and future financial challenges, along with lack of community support, as the main reasons.

The larger community feels that various non-religious groups which have made use of the church, and especially the hall, since the building was first built, have been squeezed out over the years and that there is still a “moral responsibility” to retain the historic building for community use.

They are pushing for a revamp of the management committee, but the MMUC, formed in 1964 by church attendees with the express purpose of managing, repairing, letting, improving, selling, mortgaging or otherwise dealing with control of the property, says only office bearers or members of church groups which have been in existence for at least one year on the sire are eligible to be elected to the committee.

“The decision to sell the property was a very difficult and heart-breaking one to make,” MMUC said.

“It was based on: the ageing and numerically-declining congregation; the lack of community support over the past few years especially community attendance at services; rising costs to maintain the buildings and grounds; the restrictions imposed by the COVID-19 pandemic resulting in little or no income over the last 12 months; and a forecast of little income able to be generated.”

MMUC said while it understands that the facility has been part of the Mountain Christian community for a very long time, the reality is that its ongoing operation is unsustainable.

It said the committee would like to see the church continue as a place of worship in accordance with over 100 years of tradition and that there have been enquiries from independent religious communities indicating strong interest.

Residents say the church was always intended, not just as a place of worship, but as a focal meeting point for the community and has since been “etched into the history books of the area” but the MMUC says the original minutes and constitution make it clear that the church and site were to be used for Christian worship only.

Community spokesperson, Judy Betteridge, said residents were given only seven days’ notice of an information session on the proposed sale and that any sale should be delayed until the community can explore all solutions to keeping it.

When it was first built the church housed services for Church of England, Methodist and Presbyterian denominations but with the departure of the Church of England (Anglicans) from the site in 2016 following a rent increase, control passed into the hands of the last remaining congregation, the Uniting Church (Methodist/Presbyterian).

Betteridge said community groups which had been using the hall, including the CWA, a yoga group, a playgroup and a quilting group, had been forced to relocate but the MMUC says no groups were forced out of the facilities, with some choosing to leave due to rent increases and others forced to cease following COVID-10 restrictions.

Betteridge said community members had expressed a desire to help raise funds if the church was in financial distress but MMUC said the church is solvent, with future viability the major concern.

Resident Margaret Pontifex, who was christened in the church, as was her mother before her, said the church had become the “heart and soul” of the community and that it was a place of reflection for many community members, whether they attended regular church services or not.

“So many community members have memories associated with the church – from weddings to funerals and christenings,” she said.

Lorraine Wilson, whose relatives were involved in construction of the church, said it was a unique fixture and the source of great ambience.

“Over the years there have been renovations and every generation has had input,” she said.

While the Constitution stipulates that any proceeds of a sale should go to a Christian organisation with “similar charitable and educational purposes”, community members are concerned that the building itself could be razed, with its present zoning allowing for the construction of housing.