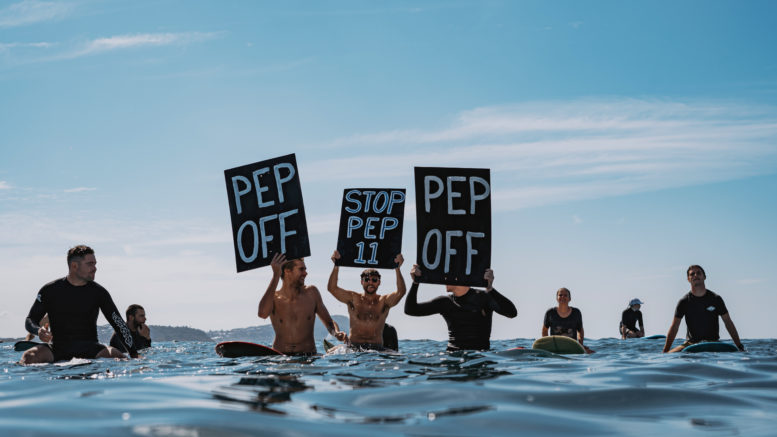 The paddle out on April 24 Photos: Surf Rider Australia

The community push to cancel the PEP11 permit for offshore drilling has taken a large leap forward, with Member for Robertson, Lucy Wicks, announcing the project will not go ahead under the Morrison government during last weekend’s Paddle Out protest at Terrigal Beach.

But there has been no movement on cancelling the licence from Resources Minister, Keith Pitt, who will make the final decision.

According to the National Electronic Approvals Tracking System (NEATS), an extension of the PEP11exploration permit lodged by Advent Energy is not yet under assessment.

Deputy Premier John Barilaro has already recommended that the permit, which expired on February 12, should not be renewed, but Pitt, as the other Minister responsible under the Joint Authority, has remained silent.

CEO of the lead operational company BPH Energy, David Breeze, said on April 28, he had heard no nothing.

“The decision on the permit is in the hands of Minister Keith Pitt, and he has not yet made his decision,” Breeze said.

“He has put out several releases and several public statements which said that he would make his decision based upon his input of the department.

“He was recently on national TV and made a further comment.”

During an episode of Q+A on April 22, Pitt said: “When I make a decision, it’ll be one which is balanced, based on the facts that are provided, the advice that I have, what is in the application and what the law says.”

CCN reached out to the Prime Minister’s Office for further comment on his stance, and he referred to his previous statement that he would oppose extension of the permit.

“I think I made it pretty clear what my Government’s view was about that,” Morrison said.

“I mean, that will go through processes, but I’ve made it absolutely crystal clear that that’s not something I support, and you can expect my view on that to be rock solid.”

There was no indication of when the decision will be made.

Wicks made her statement about the PM not supporting PEP11 during a paddle out protest at Terrigal Haven on Saturday, April 24, run by Surf Rider Foundation and Save Our Coast.

Over 200 men, women, and children paddled out to show their support in the campaign against oil and gas exploration drilling off the Central Coast.

In response to Wicks’ statement, Surfrider Foundation Australia National Campaign Director, Damien Cole, said the news was welcome but the fight was not yet over.

“We have to keep pressure up until it gets properly knocked on the head,” Cole said.

“As a new voter this year, I speak for myself and young people; we ask Minister Keith Pitt that PEP11 does not go ahead because we want leaders who care about our future and care about the places we love and depend on.”

Parliamentary Secretary for the Central Coast, Adam Crouch, was there to show his support, and said the State Government has opposed PEP11 since 2017 and reaffirmed its opposition earlier this year.

Professional surfers, Ace Buchan and Amee Donohue, were there for the paddle out, as were Labor MPs Emma McBride and Liesl Tesch who joined the protest.

1 Comment on "No PEP11 drilling under this Government – Wicks"