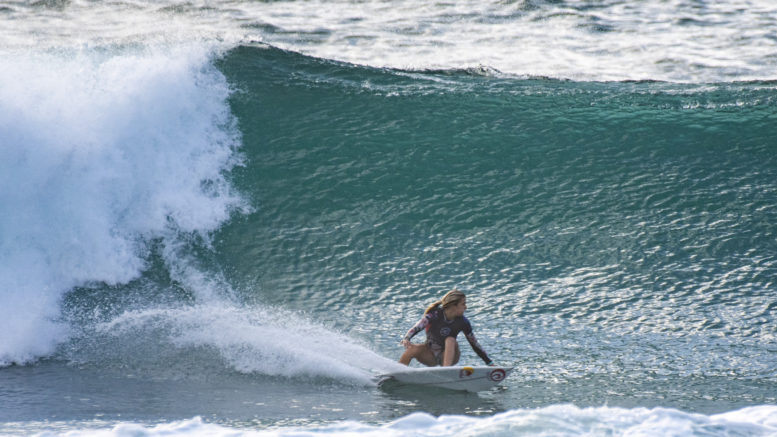 Molly Picklum on Day 6 at the Sisstrevolution Central Coast Pro

An incredibly close match-up was seen at Avoca Beach on Sunday, March 7, for the final of the Sisstrevolution Central Coast Pro between two Central Coast contestants Macy Callaghan from Avoca and Molly Picklum from Shelly Beach.

Coming from behind in the 35 minute final, it was Molly Picklum who, in the end, won by a two-wave scoreboard margin of 0.22.

It was a glorious day for surfing to finish off the competition after a week of big and powerful waves.

However, the final day saw the biggest waves of the week, with four-to-ten foot surf bombing the outer banks, calling for a high level of oceanic knowledge from the competitors.

Having won the Great Lakes Pro in February, Picklum went into the final as the slight favourite, despite Callaghan posting a much more convincing win over Freya Prumm in the semi-finals with a score of 12.16.

In the final, it was Callaghan who got off to an early lead with the final’s highest score of 7.67 on her second wave.

On Picklum’s following attempt, a 7.43 wave score pushed her up just behind Callaghan and ensured that the second half of the final would be a close contest.

Both surfers scored highly on their fourth waves, Callaghan with a 7.07 and Picklum with a 7.53 that launched her slightly into the lead.

In the final minutes, Callaghan searched for her winning wave, requiring a 7.30 wave to clinch victory from Picklum, but her last three attempts were underwhelming.

“I feel great right now, it’s been so exciting surfing against Championship Tour surfers like Macy and Sally and to win in front of my home crowd is just the best,” said Picklum, after being carried off the beach on the shoulders of her close supporters.

Callaghan’s result, albeit second to the best, will nonetheless encourage her ahead of her upcoming Championship Tour event at Newcastle in April.

“This was a great warm-up leading into the Championship Tour event at Newcastle and it’s also great for two Central Coast surfers to make the final.

“Molly’s very talented and has a great future.”

After the Sisstrevolution final came the Vissla Central Coast Pro final, which was won by Matt Banting from Port Macquarie.

With the NSW Vissla Series now at an end, the top surfers from across its four pitstops along the NSW coastline will look forward to the upcoming Challenger Series to come later in the year and will feature an international list of locations and competitors.