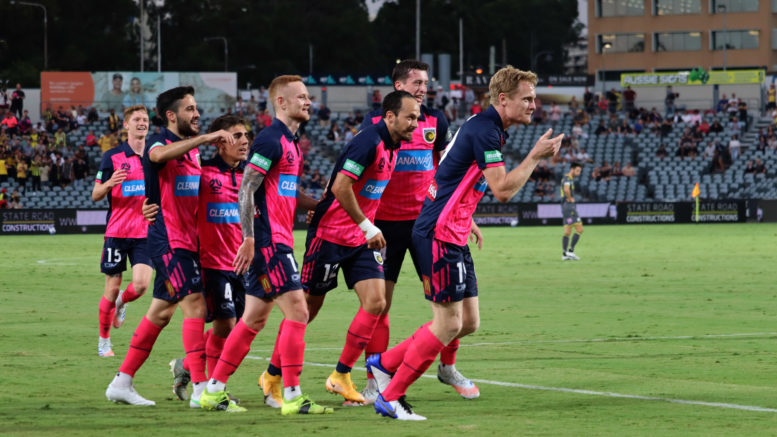 A 2-0 win for the Mariners over Macarthur at Central Coast Stadium has seen the Central Coast side launch themselves into a seven point lead on the A-League table.

The two goals came from old and new boots, with Simon grabbing the early lead in the eight minute and debutant, Matthew Hatch, sealing the deal with an 81st minute goal.

It was the second ever meeting of these two top of the table teams after the earlier away win for the Mariners in January began their newfound flurry of good form.

In the meantime, Macarthur have themselves maintained a consistent run of wins on the end of their league highest total shots and shots on target this season.

However, it was the hosts, playing in pink for their annual pink round, who posted an early goal to set the structure of the game, with Matt Simon scoring his fifth goal in six games, defying a Macarthur defensive line that boasts an almost perfect record, within the first 30 minutes.

Although finding the net due to good fortune, with Simon’s shot taking a deflection to lift his grounded, driven ball into the air above the downward stretched Macarthur keeper, Adam Federici, it was the energetic, inter-connective passing play between him and Marco Ureña that made the goal possible in the first place.

MacArthur responded with intervals of attacking possession throughout the remainder of the first half, often containing the Mariners’ eleven all within their defensive third, under the pump from consecutive balls into the box.

Despite this, the travelling Sydney side were unable to find a clear shot on goal.

Macarthur’s best opportunity came early in the second half from a set piece delivery by Benat Etxebarria Urkiaga, finding Aleksandar Susnjar at the far post.

Susnjar found the ball, but was unable to make clean contact, instead skimming the ball slowly in front of Mariners’ keeper, Mark Birighitti.

Macarthur top-scorer, Matt Derbyshire, came sliding in looking for the ball, but found more of Birighitti, and the heap of bodies in the goal area prevented Susnjar’s second attempt finding its mark.

The contest began to steady for the Mariners with their defensive efforts prevailing against the hapless visitors, and in the final third, Manager, Alen Stajcic, felt confident in replacing most of his attacking players.

Mariners’ top-scorer, Alou Kuol, came on, hungry to add to his tally, as did, Michal Janota, in the midfield.

In the 81st minute, Daniel Bouman was replaced by Under 23 Australian player and A-League debutant from Umina, Matthew Hatch.

In the very same minute, Janota forced a turnover from Macarthur’s throw-in and fed Kuol a leading through ball into the penalty area.

The whole crowd prepared for Kuol to take the chance to score again, but the forward man showed his team spirit by instead offloading in-field to Hatch with a clear angle on goal, closer in than the penalty spot.

It was the debutant’s first touch in the A-League, after playing less than a minute in the game.

With a cool head, Hatch side-footed the ball to Federici’s left hand side, who anticipated the ball going to his right, and to the delight of the 5,000 person strong support base at Central Coast Stadium, the Mariners found their undeniable winning goal.

Now seven points clear on the table, the Mariners will have to quickly prepare for their next game against Perth Glory at Central Coast Stadium on Sunday, March 14, 4:05pm.