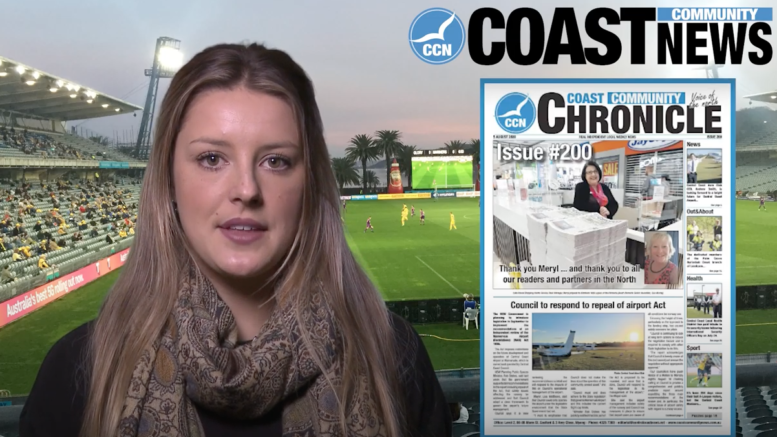 Calls for more sanctioned mountain bike trails have intensified this week after the discovery of a lethal booby-trap hidden under leaves on a popular trail in the Bouddi National park.

Scott Uzelac of Kincumber was riding on the cliff track with two friends last weekend when he discovered a wooden rail with a set of long nails partially buried beneath leaves.

Brisbane Water Police have launched an investigation to try to identify the perpetrator and have issued a warning to mountain bikers to exercise extreme caution in the area.

There is growing concern on the Central Coast about the looming threat of a new shutdown in NSW like the one in Victoria.

So far, NSW has avoided a major second wave of Covid-19 cases, averaging just 12 new cases a day over the last fortnight compared with X over the same period in Victoria.

The majority of new cases in NSW have been in a small number of hot-spots in Sydney, with no new cases on the Central Coast recorded since nnn

NSW premier Gladys Berejiklian however has pleaded with NSW residents to remain vigilant including a strong recommendation on Sunday night for people to wear masks when using public transport, grocery shopping or working in customer facing roles.

One local hotel has gone a step further in a bid to prevent the virus finding its way from Sydney to the Coast.

We spoke today to Chris From the Bayview hotel in Woy Woy.

And while we’re on the subject of shutdowns, Patrick Spedding from Gosford-based data analytics company, See Change, released postcode level data this week on the uptake of JobKeeper and JobSeeker payments.

Thanks JC, yes, the See Change data which comes from a range of sources, including the ATO, department of Employment and shows that over 47 per cent of Central Coast businesses, or some 11,453 organisations, were receiving JobKeeper payments in May.

The highest concentration of businesses receiving JobKeeper at just under 50 per cent, was the 2261 postcode, which includes The Entrance, Bateau Bay, Killarney Vale and Berkeley Vale.

Now, with respect to Job Seeker, which includes Newstart, the number of recipients appears to have plateau’d in June at around 24,000 people, while Youth Allowance recipients were also steady at around 3,000 people.

Both numbers however are almost double what they were in March, before the shutdown began.

Against this backdrop, there are several industry sectors that appear to be growing.

One of these is the aged care and disability sectors, who are actively recruiting for more staff on the Central Coast, especially to support more home-based care

Here’s what Karen Barrett, the founder of Trusted Home Care at Erina, had to say.

One sector that looks posied to take off on the Central Coast is the sustainability sector, which covers a broad range of industries from renewable energy, to recycling to new green technologies.

In September, the Coast will bring together some of the leading proponents of sustainable industry and employment in the Sustainable Business Showcase, which is being co-ordinated by local entrepreneur, Bruce Cottrill.

Here’s a preview from Bruce of what’s in store.

And finally JC, as you know, the plight of beachside residents in Wamberal and North Entrance has been a major focus in recent weeks after many of their homes began slipping into the sea two weeks ago.

This week, a taskforce was formed to co-ordinate the response, including potentially the development of a sea wall.

Two Councillors this week however, presented an alternative idea to combat beach erosion – and artificial reef, which they claim would have additional benefits for surfers and marine life.

One of those Councillors is Bruce McLaghlan and Alex Herget spoke with him earlier today.

Thanks JC, firstly the Central Coast Mariners offered a glimpse of hope to long-suffering supporters on Monday night, when 19-year old Dylan Ruiz-Diaz scored two goals in the final five minutes of their last match of the A-League season to snatch the win over Melbourne Victory.

Within 24 hours however, the Mariners future became clouded once more when owner and Chairman Mike Charlesworth announced that he will step away from the Mariners and seek a new owner for the club.

Charlesworth led the club to its first A-League premiership in 2013 but has since presided over four wooden spoons in five years and has been criticised for running the club on a shoestring budget.

Charlesworth said that if a suitable investor cannot be found, he will hand the club’s A-League licence back to the FFA.

And we’ll keep you posted on future developments as they arise.

One team of top of their competition ladder is the NSWRL Women’s team, the Central Coast Roosters.

The Roosters made it three from three last weekend after beating the West Tigers 20-4, with another sterling game from veteran hooker Kylie Hilder, Isabelle Kelly and Caitlin Johnson.

In other news, central Coast Council has confirmed it will progress with a Koala Survey.

The survey will be undertaken between September and November and using sound recordings to assess Koala numbers.

And those numbers while be lifted by the addition of no less than nine adorable new koala joeys at the Australian Reptile Park in recent months following the terrible bushfire which devastated areas of the Central Coast earlier this year.

Let’s go to Lucy now for a preview of the weekend’s weather.

Thanks JC, well you may have already noticed but the temperature has dropped and the rain has started just in time for the weekend.

Tomorrow will be partly cloudy on the Coast with a 60% chance of showers, with north-easterly winds up to 20 km/h and a maximum temperature of 19 degrees.

Overnight temperatures will then drop to just 7 degree on the Coast and 3-4 up on the mountain with the rain likely to persist through to at least Monday.

Thanks Lucy, well, with cold weather on the way and the potential for another Covid-19 shutdown, we’ll leave you today with some sage relationship advice from Charlie Winter.

Make sure you check out the Chronicle milestone edition number 200 that was out this week and features all these stories and more.

Take care and we’ll see you next week.

The Entrance Ocean Baths to be named after Grant McBride