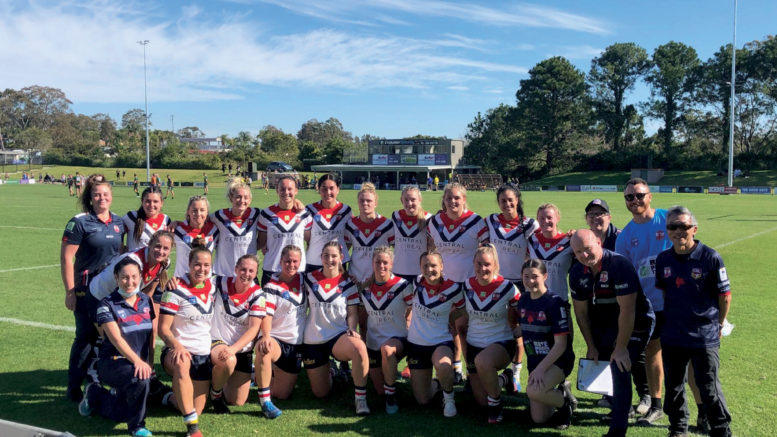 RUGBY LEAGUE – The Central Coast Roosters have recorded three wins on the trot in NSWRL’s elite women’s competition with a solid 20-4 victory over the Wests Tigers at Morry Breen Oval on Sunday (Aug 2).

But it didn’t come easy.

Ladder leaders Central Coast were trailing early in the clash, thanks to a try from Tigers centre Tia Cook and the scores remained at 4-0 heading into the half-time break.

“I think we definitely needed a tough hit out.”

The Roosters kicked into gear in the second half through enforcer Caitlan Johnston in the 40th minute.

Eight minutes later, the home side were in again through Mounties recruit Brydie Parker then Harvery Norman NSW Women’s Origin lock Hannah Southwell crashed over to add to the Roosters tally and take the lead and the final scores to 20-4.

“The first couple of weeks we had it fairly easy, so to come out and have a tough first half has done us wonders especially leading into a bye and then we really had to fight hard and play some good footy to get on top of them in the second half,” Hilder said.

“Everyone is starting to understand their roles and it was hot today, it was the first time we’ve had to play in a bit of heat as well but credit to our girls because we stuck with our game plan and we got on top of them.”

Hilder joined the Roosters this year having led the Newcastle Knights to a Premiership victory in 2019.

She is one of several players who have made the move down the M1, including Berkeley Vale junior and club captain Isabelle Kelly.

Hilder says this will be her last season and she hopes to go out holding the first Premiership trophy for the Central Coast.