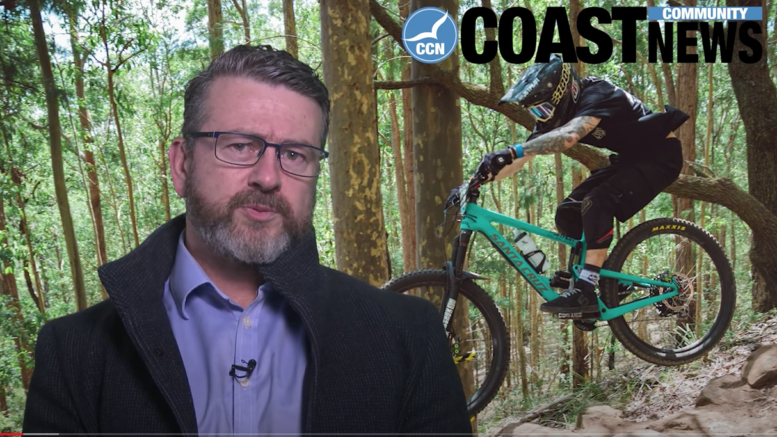 It’s a stoush that’s been brewing for years and this week it hit a flashpoint.

Environmentalist have sought to restrict mountain-biking in Coastal Open Spaces or COSS areas including, in particular, Kincumber Mountain.

But the mountain-biking community have hit back saying there simply aren’t enough approved trails to accommodate the growth in demand from tourists and locals alike.

They have also reported people booby-trapping trails with life-threatening logs and sharpened sticks.

Well-known champion mountain-biker Matt Harrington had this to say on the matter.

And there’s an intriguing interview by Scott Levi with Deputy Mayor Jane Smith and concerned citizen Joy Cooper on this issue on the ABC breakfast show available online.

Central Coast Councillors will decide on Monday night whether to accept the recommendation from staff to increase Council rates and all associated levies by 2.6 per cent.

Council has already passed a 2.2 per cent increase in water rates and the increases have created some concern among households who are already struggling with a loss of income linked to the Covid-19 shutdown.

Copacabana residents are upset by the imminent removal of a brace of Casuarina trees from Susan Fahey park as Central Coast Council undertakes a major upgrade of the reserve.

Set to face the chop are 30 Casuarinas to make way for the installation of picnic tables and a shelter and barbeque.

Council says two new trees will be planted for every one removed, but residents say the trees are an endangered ecological community and are pushing for an alternative approach.

And some strange announcements from the Prime Minister on the ongoing cyber-attack on Australian government organisations and infrastructure.

David, what do you make of all that?

Thanks Ross, state-sponsored cyber attacks have been an increasing threat over the past few years – the Prime Minister seems to think we’ve hit a threshold this week and his announcement suggests a more assertive government response might be looming.

Check out cyber.gov.au for more information and guidance.

Now, closer to home, Central Coast Council staff have reportedly issued Councillors with a social media code of conduct order which includes strict protocols on Councillors’ communicating with the public.

The so-called “gag order” has not pleased everyone however, including The Entrance-based Councillor Bruce McLaghlan.

In other news, the Coast’s leading enviro-warrior, Jake Cassar has fired some pretty direct criticism at the Darkinjung Land Council

Cassar is outraged at the development proposed by the Darkinjung for a new 70-home residential subdivision in existing bushland on Woy Woy Road, Kariong.

Now, while the very popular, annual 5 lands walk had to be cancelled this year, Avoca-based organiser and music maestro, Yantra de Vilder has reconstructed the event as a YouTube musical premiere which will be livestreamed around the Caost later tonight.

I caught up with Yantra earlier this week.

And finally Ross, on a very sad note, the Killcare lost one of its most beloved residents last week with the passing of musician, community organiser, social justice advocate and cherished mother, Narelle Jones.

Her funeral was on Wednesday and was live streamed to many hundreds of people all around the Coast and indeed the nation whose lives were touched by this remarkable woman and her love of music.

Thank you David, a beautiful woman and a beautiful family – and our thoughts are with them this week.

Turning to Sport, CCRU this week released a draw for 2020.

The shortened season will be played over nine rounds, with each club to play each other once and a four week finals series in October.

The first week of action is currently scheduled to kick off on July 18 with Avoca Beach taking on Gosford at Heazlett Park.

Halves Blake Green and Kodi Nikorima were in sparkling form, as was centre Peta Hiku who scored three tries, [paused] including this half-volley.

The Warriors are now two wins from 5 rounds and take to the field at Bankwest Stadium against the Rabbitohs shortly.

Coast Community News Issue no. 247 was hot off the press this morning, including all these stories and much much more.

For those of you wondering what has happened to Joffa and the Woy Woy Philosophers’s society, I have it on good authority they will be back next week after a deep-dive Shopenhauer off-site.

And we leave you this week with a preview of tonight’s premiere 5 lands walk event, which this year comes to you in musical form via YouTube and kicks off at 8pm.

Presented by Ross Barry with David Abrahams. Filmed and edited by Alex Herget