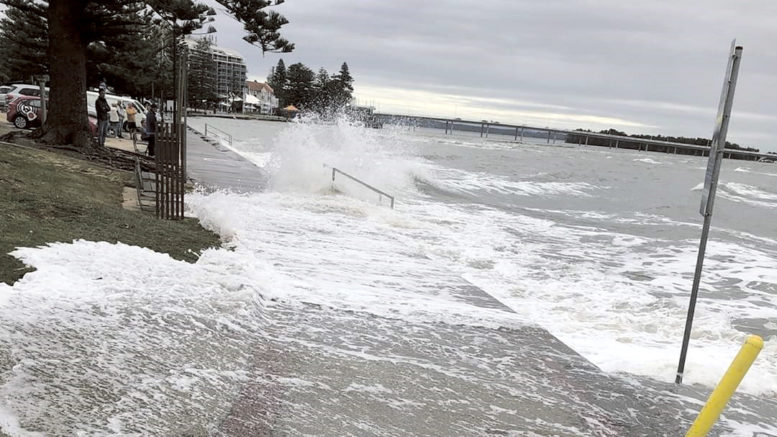 A storm surge washed waves up over the walkway along The Entrance foreshore Photo: Danny Pokrajac

The Entrance copped the brunt of the storm surge with high seas swirling up and over the sea wall and lifting huge concrete slabs along the Memorial Park foreshore walkway.

Gale warnings were issued by the Bureau of Meteorology on Monday, May 25, for coastal waters on the Central Coast, as weather conditions over the weekend continued to deteriorate.

A thick layer of sand was swept up to cover the car park.

On Monday, winds reached up to 35 knots (about 65kmh) and seas were 2.5m up to 4m offshore south of Norah Head, causing hazardous, large and powerful surf conditions.

The levels were likely to rise further on Tuesday and Wednesday and a Council spokesperson said on Tuesday morning that the Long Jetty gauge was not expected to meet the Bureau of Meteorology Minor Flood Level of 0.9m AHD.

“Current higher lake levels are being driven by coastal processes and not rainfall,” the Council spokesperson said.

“The mouth of The Entrance Channel is currently open and Council staff are not expecting to manually intervene with the operation of the channel during the current east coast low event.”

A spokesperson for the State Emergency Service said despite the weather conditions there had been minimal impact to property, with call outs mainly of a residential nature for leaking roofs or roof damage, blocked drains and sandbagging to stop lapping water up to doors or garages.

Vigorous south to south-westerly winds, rain and high seas were part of a deep and complex low pressure system over the Tasman Sea.

Hazardous surf conditions, with waves exceeding 5m, eased by Tuesday afternoon, but not before causing damage and coastal erosion, particularly in areas exposed to southerly swell.

This low was expected to linger offshore, gradually weakening and moving a little further north during Tuesday and Wednesday, before moving to the east mid-week.