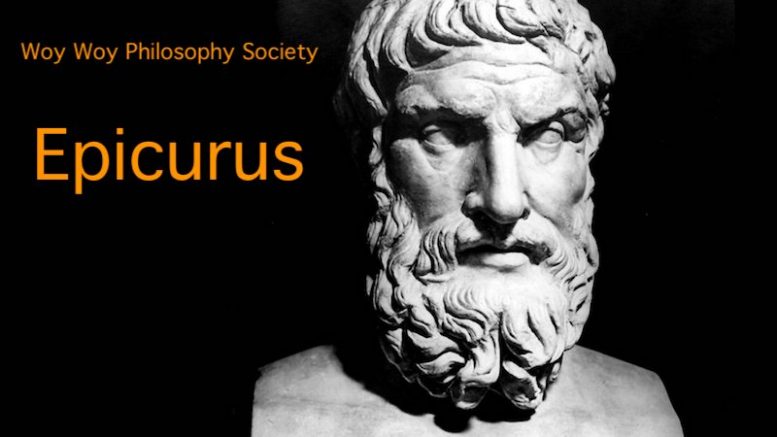 In the old, stone craft beer halls of Ancient Greece, late at night as the fire burnt low, the few remaining souls would join together in song.It was a melancholy song, a song lamenting the death of Alexander, the decline of Greek culture and the encroachment of those pesky Romans.

My ancient Greek is a little rusty these days but, roughly translated, it went something like this:

It was widely believed our good colleague Robbo was in fact a direct descendant of Epicurus. Some even said his first name was Epicurus. No one knew for sure of course.

After his old ma died, his birth certificate was lost and she’d always just called him “little Robbo” in honour of dad who’d left for the Territory shortly after his conception. It was fitting therefore that Robbo got the first round of crafties, here at the Woy Woy University ‘Atomic Swerve Bar’. “I don’t understand,” said Thommo.

“If you are of the line of Epicurus, why did you become a brick-layer, instead of gettin’ one of them Ph.Ds?” “Maybe I didn’t need to,” Robbo replied. “It’s a paradox, aint it, just like the Paradox of God.” “The what?” we all said as one. “The Paradox of God,” he said. “You know, Evil exists right? So, God either wishes to take it away, but he can’t, or else he can get rid of evil, but just decides not to. So he’s either not as powerful as everyone thinks, or just not as nice.” “

Well, which is it?” asks Thommo. “Last one I reckon. I mean, if he’s powerful enough to make a whole universe, surely he can get rid of a little bit of evil from just one planet.” That all seemed clear, but Johnno was a big believer in a powerful and noble God and in a Divine source to Plato’s “forms”. “I can’t even look at you right now Robbo,” said he. “I’m not sayin’ there’s no God. I’m just sayin’ it’s possible he mighta been …” I

t was a good time to move the discussion on. “Epicurus’ philosophy was that the basic aim of people was to attain ataraxia.” “I had that once,” said Thommo. “You get it from eating watermelon seeds. You really gotta spit those little buggers out.” “No Thommo, it means a state of happiness and tranquillity that comes for freeing oneself from fear of pain and death. Epicurus said it comes from living a self-sufficient life surrounded by friends … and keepin’ away from Spartans I guess.”

“How do you overcome the fear of death?” asked Thommo. “I mean, I got my harmony pyramid and all, but I’m too scared its gonna turn me into a vegan to use it.” “Well, according to Epicurus, God’s too busy managing bigger universe stuff to get involved with human affairs. So death is the end of both the body and the soul and, ergo, you don’t feel anything and so there ain’t anything to be afraid of.”

“If that were true,” said Johnno, who still wasn’t looking at us, “there would be complete anarchy – a completely amoral society.” “Epicurus said people should behave ethically not because the gods will punish or reward us, but because amoral behaviour burdens us with guilt and prevents us attaining ataraxia.” “Ah, guilt,” said I. “Now that could be the basis for a whole new religion. Shame no one thought of that.” But we digressed. “Epicurus said our senses are the only reliable source of knowledge about the world. In other words, matter’s all that matters. He also said all matter was made up of tiny little particles, all buzzing around in space.” “You mean drones?” “No Thommo … I mean atoms.”

“It’s a bit cold and clinical, don’t you think?” said Johnno who still wasn’t looking at us. “I mean how do you explain ‘personality’?” “Well, he said all human activity was the results of atoms spinning around and pulling us here and there,” I said. “and that a few blokes had atoms with a mind of their own that could deviate, thus allowing them to possess free will in an otherwise deterministic universe.

He called it the Atomic Swerve.” We all paused and looked up at the sign over the bar. “You mean he named them after this bar?” said Thommo. “Exactly.” “He said everything we need to tell right from wrong is right here inside us – a feeling in our gut,” added Robbo. “We don’ need any scriptures or even Plato’s method of Reason.” “That’s rubbish,” said Johnno who’d finally turned to look at us. “Epicurus was a hedonist who thought anything that was pleasurable was morally good. He was a patron of drunkards, whores, and gluttons.” “Yeah,” we all said, “And your point is?”

“Goddam it guys, he might have even been a vegetarian!” “We all giggled – it wasn’t like Johnno to take the Lord’s name in vain. And we all knew you couldn’t be highly intelligent without eating red meat. “Many think he was the father of The Enlightenment Johnno,” said I, risking a further tirade. “He even offered four different scientific explanations for Lightning, other than God throwing angry spears at people.” “He fathered much more than The Enlightenment,” said Robbo. “And all of his explanations for lightning turned out to be wrong.” “True, but it made people search for the real explanation,” said I. I thought I’d taken it too far now.

Robbo’s right eye was starting to twitch. “I met my missus in this bar you know,” chimed in Boof. “I didn’t know you went to Uni Boof,” said I “I didn’t, I just did a guest lecture here on the Ethics of Science.” “I didn’t know you lectured on Ethics.” “I don’t.

I’m a refrigeration mechanic Joffa, you know that. I was doin’ a job here and the lecturer didn’t turn up … so I just filled in for him. The pay was crap, but I got to hang out here at the Swerve.” “How did you meet your missus?” “Well, when I first saw Maude, my outer electron went crazy.” He then lowered his voice to a whisper.

“Joffa, don’t tell Johnno, but I think I got me one of them free willy atoms.”