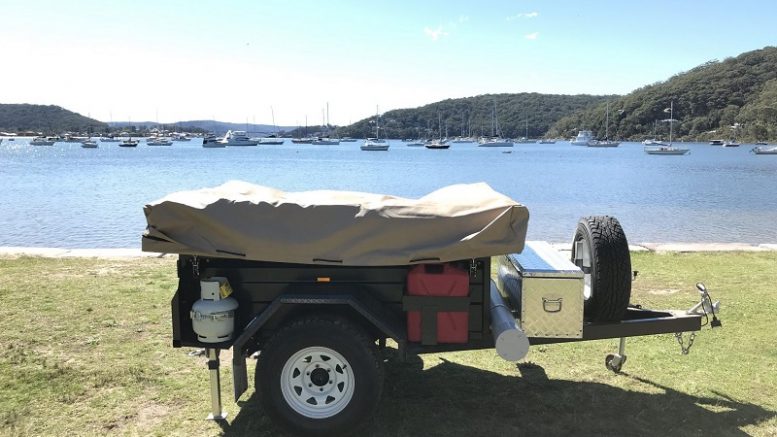 A Marlin Campers trailer by the Gosford Waterfront

West Gosford manufacturer, Marlin Campers, has kicked off 2020 on a high after winning the Australian Camper Trailer of the Year Award in the under $25,000 category, for its Escape Deluxe model.

Retailing for under $12,000, the camper trailer was up against finalists more than double its price point.
Entry to the national awards, which adopts a rigorous off-road judging process over three consecutive days, is by invitation only.
All four judges said they were impressed with the camper trailer’s “refreshing simplicity”, solid construction, off road capabilities and exceptional value for money.

Marlin’s Escape Deluxe, like their other models, is made to order on the Central Coast from quality Australian made components.
Judge Kath Heiman said Marlin Campers’ customer care and after sales service also stood out to the judges, who were particularly impressed that all buyers are offered two nights in a local holiday park so they can learn about the camper and how to set it up from the manufacturer himself.

Marlin Campers was established in 2008 by Steve Brettoner, a family man and lifelong camping enthusiast from Bensville.

“What I have come to understand is that people aren’t buying my campers because that’s all they can afford,” Brettoner said.
“It’s because they’re looking for that simple escape.
“Once I narrowed that focus down, it became really clear what I was doing.
“I’m not trying to be everything for everybody.
“What I am doing is servicing a segment of the market to an exceptionally high standard.”

Now making and distributing campers to order for a growing national clientele, Brettoner, who currently employs one full time staff member, is on the verge of growing the business.
“I feel like this year is going to be the overnight success story that I’ve been working on for a decade,” he said.