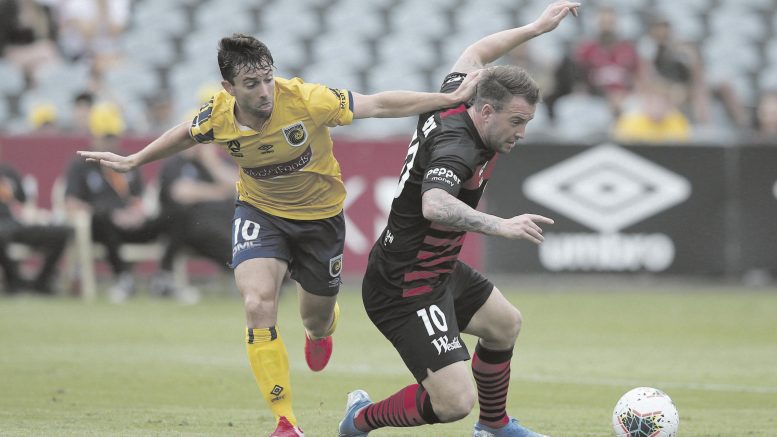 Unfortunately for the locals, it was the Western Sydney Wanderers who emerged with three goals and three vital competition points.
The 3-1 win ended a three match losing streak for the Wanderers and marked a positive debut for caretaker coach, Jean-Paul de Marigny.
For the Mariners, the loss sees them slide eight points below the bottom six, with only the Newcastle Jets beneath them on the A-League ladder.
The Wanderers began energetically and threatened the Mariners’ defence several times in the opening minutes.

German international, Nicolai Muller, missed a one-on-one opportunity in the 30th minute, screwing the ball past Mariners’ keeper, Mark Birighitti, wide of the post.
Muller quickly made up for his mistake when a defensive mistake from the Mariners gave him an opportunity in front of goal a minute later, and he capitalised.
At 1-0 down at half time, the Mariners launched a spirited revival.
Alen Stajcic brought Matt Simon into the attack early in the second half and the Mariners’ forwards pressed for an equaliser.
Once again however, the local side lacked the precision to impact the scoreboard, with several crosses failing to find their mark.

A strike by Jordan Murray in the box went sailing over the bar, while none of Milan Djuric’s three strikes troubled the keeper.
Just as fans hoped the breakthrough might come, Tommy Oar compounded an earlier mistake by monstering Simon Cox in the box, to give the Wanderers a penalty opportunity.
Former Mariners’ golden boy and Western Sydney Wanderers Captain, Mitchell Duke, stepped up to the mark and provided spectators a rare “panenka” moment.
After setting himself for a long run-up, Duke feigned, causing Birighitti, playing in his 100th A-League match, to commit to a right hand dive.
Duke then casually dinked the ball over Birighitti’s legs and into the middle of the net.

The “Panenka”, made famous by 1980s Czech star, Antonin Panenka, has plenty of scope to go badly wrong, but Duke executed it perfectly.
The Mariners responded valiantly and continued to press.
Eventually, Wanderers mid-fielder, Pirmin Schwegler, chopped Matt Simon down in the box.
Simon made no mistake with the penalty to give the yellow and blue late hope.
Newly-signed youngster, Dylan Ruiz-Diaz, joined the fray and added life to the Mariners’ attack.
A powerful header from Ruiz-Diaz looked set for the right hand side of the net, only to be pushed wide by Wanderers’ keeper, Daniel Lopar, at the last moment.
With just a minute left on the clock however, Wanderers debutant, Simon Cox, completed a stunning pinball goal to seal the game for the red and black.
The loss will compound pressure on the Mariners’ coaching staff.
In 15 matches this season, the side has managed to score just 14 goals, with almost half from penalties, while conceding 28 goals, almost two goals per match.
The January transfer window has also featured an exodus of talented players.
Two weeks ago, the club announced that Tommy Oar would depart at the end of the season to join new Sydney club, Macarthur.
Last week, the Mariners announced that Giancarlo Gallifuoco will also depart the club with immediate effect.
According to CEO, Shaun Mielekamp, the 25 year old defender requested a release from the club to pursue an opportunity with another club, with the potential to play AFC Champions League football.
Gallifuoco only joined the Mariners in May 2019.

He previously played U23 football for Tottenham Hotspurs and Swansea City before making his A-League debut for Melbourne Victory in 2015.
On a more positive note, the Mariners have announced the signing of forward, Chris Harold, for the remainder of the 2019/20 season.
The 27 year old Harold, who played for Australian U20 and U23 sides, was previously at Perth Glory for eight seasons where he scored 21 goals in 143 appearances.
Harold said he was excited to be joining the club where he has friends and former team mates in Jack Clisby and Danny DeSilva.
Harold’s contract with Glory was terminated by mutual consent.
He played just 55 minutes of game time in three appearances for Glory this season.
The Mariners will now set themselves for their next game, an away game with the Newcastle Jets on February 9, in what now looms as a battle for the wooden spoon.