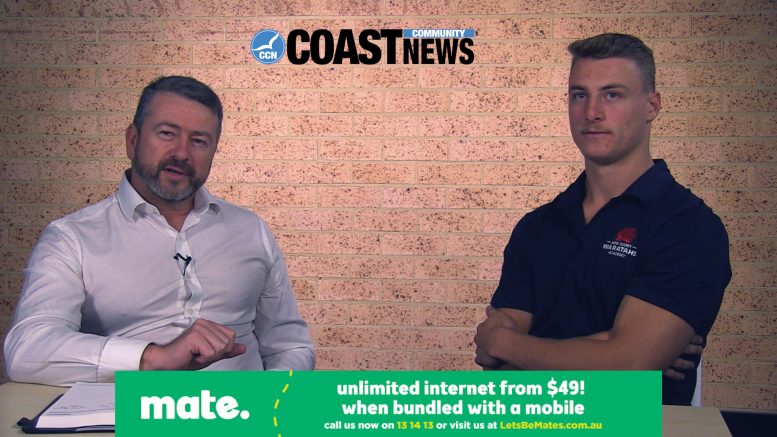 Abbie Wilcox made her bronze medal-winning jump in the women’s aerial at the World Cup freestyle skiing tournament in America’s Deer Valley. Willcox qualified fifth for the final in Europe in January and then scored 81.76 in that jump to snatch the bronze medal in the finals on Saturday.

The so-called Pink Lady saga took another turn this week. At a hearing on Wednesday night, the Central Coast Cricket Association lifted two of the three penalties initially handed down to the Southern Spirit Womens T20 team.

The team ignored a directive from the CCCA three weeks ago and played in pink Hawaiian shirts as part of a McGrath Foundation “Pink Stumps” fundraiser. The punishment included a $1000 fine, a loss of 20 competition points and a 4-match suspension of captain Sally Oman. The fine and the loss of points were dropped at the hearing, but Oman’s suspension was upheld.

We’re very pleased to be joined in the studio today by Lachlan Shelley. Lachlan is a former Gosford Rugby junior and has played the last two years for Eastwood.

More importantly, he has just been named in the Junior Wallabies squad ahead of the World Rugby U-20 Championships to be held in Italy later this year. Lachlan, thanks for joining us.

The central coast roosters have launched a new team to play in this year’s NSW Womens Rugby League premiership. The team will feature a number of players who played for Sydney clubs as well as the Newcastle team last year. This will include NRL star Isobelle Kelly.

The 2018 Golden Boot winner will join the St George-Illawarra team in the upcoming rugby league nines. And just in case you don’t know who Isobelle Kelly is, take a look at this.

Finally, in football it was a seven goal shootout up at Newcastle yesterday between the Jets and the Mariners. Torrential rain had threatened to postpone the match at McDonald Jones Stadium and it was the Jets who adapted to the sloppy conditions led by led by a prwessure- relieving brace from key man Dimi Petratos. That loss was now the sixth in seven games for the Mariners and pressure is now building on coach Alen Stajcic with the team staring down the barrel of a second consecutive wooden spoon this season.

That all for Around The Grounds this week. Hopefully the fields will dry out during the week and we’ll be back next Monday with more local spoting news.

As always, our thanks to MATE for their loyal support of sport across the Central Coast.

Recorded in our studios in Gosford, presented by Ross Barry.

Sports – Around the Grounds