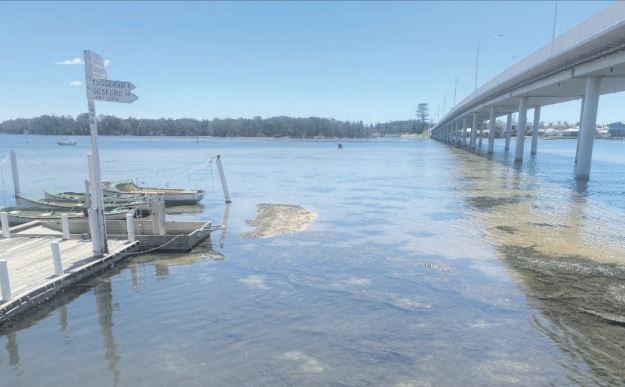 The shallow waters around The Entrance boat shed where even paddleboarders run aground.

Central Coast Council is searching for funds for emergency dredging of The Entrance Channel.

Councillors decided at the December 9 meeting to lobby the State and Federal governments and they have their eyes on money which was set aside for ongoing maintenance of Ettalong Channel after the recent completion of dredging there.

This action came about from a Notice of Motion by Cr Greg Best who wanted an urgent investigation into the continuing deterioration of the Tuggerah Lakes and the choking of The Entrance Channel. He informed councillors how the siltation of the channel was affecting the historic Entrance Boat Shed, saying “2020 marks the centenary of this local icon and it may well also mark its demise”.

Proprietor of The Entrance Boat Shed, Toni Moon, said in Public Forum that she and her husband, Terry, bought the business two years ago “with the vision to bring the old girl back to its former glory”. “The boat shed will be forced to close if something isn’t done immediately, ” Moon said. “We need an emergency dredging program.

“Just look at the state of The Entrance Channel at the moment, you’ve (Council) neglected our main asset, the asset that attracts tourists to the area, the asset that keeps our business and many others alive, ” she said. Moon said it was not just the shallow waters because of the siltation, it was the growing seaweed and build up of wrack because of the poor water flow. “The wrack is now stuck under the boat shed, it’s deep, it’s not moving, and it’s going mouldy, which is not healthy, and it stinks like you wouldn’t believe, ” she said.

“In certain parts, on the road side, it has dried off and that’s a fire hazard, so if someone does something stupid like flick a cigarette, we’re in trouble. ”

Moon said because of the shallow waters and the seaweed, their equipment was being damaged. “We’ve already had two of our new motors just about burnt out because people who hire our boats don’t realise to turn motors off when the wrack is so thick, ” she said.

Mayor, Lisa Matthews, called for the CEO, as a priority, to provide full details of Council’s short and long term dredging plan, including the acquisition of a suitable dredge. Cr Jane Smith questioned whether keeping the channel open was the objective under the Tuggerah Lakes Estuary Management Plan. “I think it’s more for a flooding issue, isn’t it? Rather than for navigation, ” she said.

Council Director, Environment and Planning, Scott Cox, said that the dredging program in the past had been carried out for an exchange of water between the lake and the ocean. He said current restrictions under the dredging licence was that it had to be 10m away from a jetty or wharf and 15m from a pylon or a bridge, which limited the areas at The Entrance where dredging could occur. Council has already started a rubbish clean up in the waters from Picnic Point to the eastern point, past Memorial Park.

CEO, Gary Murphy, will write to Terrigal MP, Adam Crouch, for advice as to whether a portion or all of the $1.4M in funding left over from dredging Ettalong Channel can be diverted to fund dredging of The Entrance Channel as an interim solution. Also, Council will convene a meeting of experts and stakeholders to discuss an ongoing strategy to keep The Entrance channel open and accessible for the community.