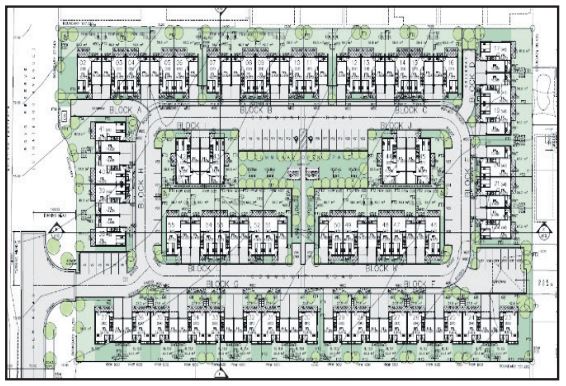 Site plan of the 54 dwellings on the Charmhaven land

After several years of community consultation and amendments, Lake Haven Development P/L has been given the go ahead for a 54 dwelling complex in Charmhaven.

Central Coast Council approved the $10M development at its December 9 meeting and Cr Doug Vincent thanked the developer who was “flexible to listen to the community and make amendments”. The 1.3ha of vacant land at 7 Stratford Ave, will be transformed into a community title subdivision with lots ranging in size from 144.1sqm to 264sqm.

Under a community title scheme, a resident owns the lot they buy but shares responsibility of common areas, such as recreational spaces and driveways, with other residents.

There will be 12 blocks of attached double-storey buildings and each home will have three bedrooms and a single garage. There will be 38 visitor parking spaces throughout the site and an open recreation area in the centre of the complex.

Following Council’s deferral of the matter in September for a site inspection by councillors to examine traffic and road issues, the applicant put in amended plans. The site inspection was attended by Councillors Jillian Hogan, Louise Greenaway and Jeff Sundstrom, together with Council staff and 11 residents.

Some concerns remained about drainage at Oak Rd and Merinda Ave and whether it could cope with the extra housing, whether there was enough on site car parking, the suitability of double-storey housing in a single storey area, and consideration of a centralised rainwater tank on-site.

The new plans altered vehicular access to the site from the constructed portion of Stratford Ave, instead of the previously proposed access from Moala Pde.

This amended access also means only 19 trees need to be removed from Stratford Ave, compared to 80. To allay concerns from neighbours about the new residents parking in streets outside the development, The Community Management Statement for the complex will add a clause to allow “stacked” parking which means residents could park in front of their garages if need be.

A Council report said an upgrade of the street drainage in Oak Rd was proposed to direct stormwater from the development to the piped drainage system downstream at the Oak Rd/Merinda Ave intersection.

A report to Council said the development would assist housing needs and promoted “walkable” neighbourhoods by being near numerous shops and services at Lake Haven shopping centre which was within walking distance. The development was compatible with the scale and character of the area, the report said.

Old farm could be donated