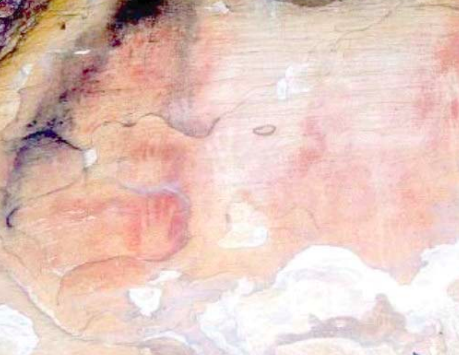 The last remaining significant Aboriginal Women’s site in NSW, as well as an immediate cultural landscape, is being considered for listing by the NSW Heritage Council.

Submissions close on May 15, and, Ms Tassin Barnard, of the Australian Walkabout Wildlife Park at Calga, has called for the community to make submissions in support of the Heritage Listing. “For the fi rst time, a Government department is actively helping us to save the Calga environment in perpetuity,” Ms Barnard said. “If community members don’t put in a submission to support it, it very likely won’t go through, and the land will remain at risk of destruction,” she said.

“The team at our local NSW Office of Environment and Heritage (OEH) have put forward the proposal that the amphitheatre defended by our Land and Environment Court decision in 2015, now be Heritage Listed. “If enough of us put in submissions of support, this could be our final step necessary to give enduring protection to the Women’s Site and surrounding cultural landscape. “At the end of the day, it will be the Minister for Heritage and Environment who makes the final call. “We have to let Ms Gabrielle Upton know that we care, that we, the people, want this sacred place protected,” she said.

Ms Barnard successfully challenged, in the Land and Environment Court, the NSW Department of Planning’s approval of an extension of the Calga quarry, which would have destroyed the site, or left it isolated. The Darkinjung Local Aboriginal Land Council (DLALC) simultaneously ran a Land and Environment Court case against the NSW Planning Minister. The quarry extension approval had been made under Part 3A of the NSW Environmental Planning and Assessment Act, which is now defunct, as a state significant development, so it bypassed Gosford Council, and was approved by the NSW Planning Assessment Commission (PAC) under delegation from the Planning Minister.

“We won, everyone said you couldn’t take the government to court and win, but we did, and what is very important is that we had two precedents set,” Ms Barnard said. “The first was that the entire cultural landscape had to be preserved. “Rocla, who owned the quarry at the time, proposed that they could protect the Women’s Site but destroy everything else, but the court found that there was connectedness between the various sites at Calga and they all needed to be protected. “

The second precedent, and it was the first time it was set in any state, was that the precautionary principle, that if there was a demonstrated likelihood that the development could cause harm to the environment then it should not go ahead, was applied to the cultural and not just the natural environment,” she said. “What people must understand is that just because we won the court case does not mean the place is safe.

“Heritage listing will make the cultural landscape safe.” Dr Annie Ross, a University of Queensland anthropologist hired by Rocla, wrote to the Land and Environment Court and, according to Ms Barnard, her letter was one of the reasons Walkabout Wildlife Park and Darkinjung LALC won their cases. “Her letter was read out on the last day and we had been in court for a year. “She is an expert on women’s places in NSW, and she said the Women’s Site at Calga was the most important women’s site in NSW, that there had been other significant sites, but they had all been destroyed, so this was the last remaining and it must be conserved.”

According to Ms Barnard, four landowners would be affected by the heritage listing, the Walkabout Wildlife Park, Hanson Cement, which is the UK company that purchased the mine from Rocla, a fraction of Glenworth Valley, which is owned by, Mr Barton Lawler, and NSW National Parks (part of Poplan National Park). “No other land or landowners in Calga are affected, as there is no other landowner within the natural amphitheatre and Aboriginal Place that slopes to the south-west of the natural ridgeline that runs along Peats Ridge Rd and the border of the existing Calga quarry,”

Ms Barnard said. According to the NSW Office of Environment and Heritage statement of significance: “The Calga Aboriginal Cultural Landscape may be of state heritage significance as a symbolic and ritualised cultural landscape comprised within a natural amphitheatre formed around a gully. “Across the site, interconnected journey markers, including topography, water sources, vegetation, rock engravings, pigment art and stone arrangements have traditionally signalled information including directions, boundaries of initiated authorisation, ritual practises and stories.

“Whilst individually significant, when read together, these sites are able to communicate complex messages about Aboriginal spirituality and cultural practice, particularly with regard to sacred women’s business. “The significance of individual sites within the protective embrace of the topography is enhanced by the tangible and intangible connections between them. “The site is known to contain examples of very rare rock engravings and stone arrangements. “The landscape is associated with stories and belief systems of Baiame, Bootha and Daramulan, who are recognised by Aboriginal people across much of south eastern Australia as the allfather, son and mother, who came from the sky, created the earth and other beings and passed down sacred law to Aboriginal people.

“Aboriginal women view the place as an important link to their female ancestors and key resource for the teaching of future generations of Aboriginal girls and women about their culture and spirituality. “The 2015 judgement of the Land and Environment Court, based largely on evidence given by Aboriginal women, is regarded as a historic landmark precedent in the way that Aboriginal cultural tangible and intangible values are recognised by the state. “The site is a u-shaped gully overlooked by a natural sandstone amphitheatre formed by two westerly spurs off the ridgeline of Peats Ridge Rd.

“Formed by the incision of the sandstone plateau by a tributary of Cabbage Tree Creek, the upper slopes of this amphitheatre, between the 150m – 200m contours, predominately consist of a series of sandstone platforms which create a terraced landscape. “There are approximately 126 individual Aboriginal sites known to exist within the landscape, including shelters, art, stone arrangements, campsites, middens and archaeological deposits. “The most notable engraving site, known as ‘the Women’s Site’ is located on a large sandstone outcrop, which slopes slightly south along the northern ridgeline.

“Two large engravings are present on the sandstone surface: a large emu and a prostrate female figure.” Standing stones and stone arrangements are also described in the OEH statement of significance. Further features and details of the Women’s Site on the northern ridgeline are not able to be publicly shared out of respect for cultural and gendered sensitivities. Ms Barnard said she believed community support for the Heritage Listing would be necessary to get it through. “Even an email stating that you believe the sight is important to Aboriginal people and that you support its listing as a heritage item would be helpful and show community support for this initiative,” she said. Submissions can be emailed to heritage@heritage.nsw. gov.au or posted to Heritage Council of NSW, Locked Bag 5020, Parramatta, NSW, 2124.

Driverless vehicles a big opportunity for people with a disability