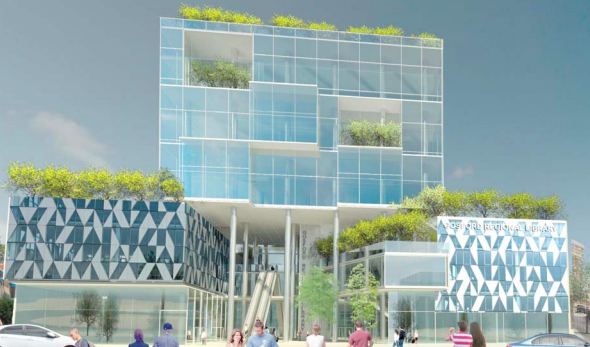 Concept 2 (above) was preferred by the community; it has 10 storeys including A-grade commercial space and three levels of basement parking

The community’s preference for a regional library integrated with a-grade commercial space may be upheld when Central Coast Council votes on the matter on May 28.

On April 11 the Council resolved to build a stand-alone regional library in Donnison St, even though the majority of community participants in an online survey had voted for a library integrated with a commercial building. A rescission motion at the April 23 Central Coast Council meeting was successful, and that earlier decision was reversed. However, after a scrappy and directionless debate, Councillors once again deferred a final decision on the location and form of the new library.

It is understood that the absence of one councillor at the May 28 meeting, and a change to the voting status of another, may result in a third option making it over the line, which would see the regional library built in Donnison St, with commercial space, and guarantees to ensure the project’s financial viability. Mayor Jane Smith is not in favour of such a proposal and has expressed concerns that a library integrated with commercial space could represent a financial risk to Council. All Councillors voted in favour of the rescission motion except, Mayor Jane Smith and Clr Louise Greenaway, and Clr Doug Vincent was absent.

The deferral was finally accepted: “to consider the commercial viability of a modern facility that the community have said they want for the Gosford CBD.” “Following a detailed Councillor workshop, a further report on a revised proposal for a Regional Library in Gosford will be presented to the May 28 Council meeting,” Mayor Jane Smith said. “We need to ensure that we create a truly iconic building in the city centre, helping to attract business and investment to the area, as well as increase connectivity amongst educational institutions,” Mayor Smith said. “This catalyst project for the CBD must be a central meeting point for locals and visitors alike, creating a true innovation centre and drawcard to the city centre,” she said. “Libraries are at the heart of creating livable, connected and sustainable cities, and that is definitely what we want to see for the Gosford CBD.”

After the meeting, Mayor Smith said she was concerned about the financial risks involved in committing to build commercial space with so much private development coming online in the CBD and surrounds. “With some major projects, such as RPAC and the library, I don’t want to overextend without sufficient guarantee that funding will be forthcoming,” Mayor Smith said. “Right around NSW there are stories of councils that have been a little ambitious and have come down with overextending, and I am a little cautious about our risk management. “I think a regional library is a great project for the Central Coast, and for Gosford’s city centre in particular, so really, my specific concern is about the financial risk and making sure we have got that covered,” she said. “We have got some large projects, and whenever we put up a large amount of money, that means that we are not putting it up on something else, and we need to ensure it will be successful.”

On April 11, Councillors had voted in favour of the standalone library option, wholly on Council-owned land, at 123A Donnision Street. The building was to be redesigned to accommodate possible additional levels of commercial development if further funding was secured. However, a rescission motion to reverse Council’s decision was put forward by Councillors Greg Best, Bruce McLachlan, Jilly Pilon, Rebecca Gale Collins and Troy Marquart, for the April 23 ordinary Council meeting.

Mr Tony Mylan, from ET Australia, which is a current tenant of the 123A Donnison St property and owns the adjoining building, spoke against the rescission motion. “It puts further stress and concern on all of the people involved in this development,” Mr Mylan said. “The description in the rescission motion of this being ad hoc I find a bit peculiar, because I have been working with Gosford Council and Central Coast Council for three years, and it has been anything other than ad hoc.

“I commend staff, directors and the Acting CEO for the work they have been doing negotiating and consulting with us and the general public.” Mr Mylan pointed out that 70 per cent of respondents to a survey about the library were in favour of Concept 2, a library combined with commercial space built across the Council and ET’s building site. “Despite public support for Concept 2, Council voted for Concept 1. “I am at a loss to the politics, but I wanted to indicate to the meeting this evening that the rescission motion has some general points in it that leave ET Australia and other tenants with no timeline as to what might happen next, unsure what to do with tenants in the building, how it will impact on the school year, how it will impact tenants.

“It will leave us with more questions than we had before this evening.” He said he appreciated Council’s willingness to vary Concept 1 so that all current Parkside tenants would be accommodated. Clr Jillian Hogan asked Mr Mylan to explain the impact the rescission motion was having on the tenants, many of whom were community service providers. “We have a tenant in that building whose lease expires on November 30, and we have been exchanging correspondence about an extension to the lease, and our tenants, who are a state government department, are extremely keen to extend the lease.

“They wish to have a five-year lease with a five-year option, so they can refit and refurbish their premises. “We have been giving them a please wait response. “We wrote to Council asking for a timeline for development, indicating why we needed to do that, and as a result of that, we have now entered negotiations with the state government department to extend their lease. “If we do that, the space in Donnison St, and the car park, would be tied up for the next 10 years.

“We have that commercial reality, we also have the school with 138 enrolments, and our school is growing, so we need to have a decision made so that all stakeholders can get on with the planning so that we can create a great opportunity in the city centre. “The young people who suffer anxiety will be very upset to know there is no answer to where their school will be as early as the beginning of next year.”

Clr Hogan also asked Mr Mylan to comment on the community’s perception of Council’s decision not to adopt the concept that 70 per cent of survey respondents were in favour of. “I don’t think that I am across the zeitgeist of the whole community to answer for everyone, but my mobile phone has not run as hot and I haven’t had as much contact with the media prior to this, so clearly there is an interest, and people are very keen to know how that is going to impact on the Parkside tenants and the young people who come there.

“People have indicated to me that it is a strange democracy when Council can go out and ask the public about what they want, have a vote, decide that Concept 2 was the preferred one, but then vote for Concept 1, so the intrigue and curiosity of the community has been piqued,” Mr Mylan said. Local historian, Ms Kay Williams, also addressed the meeting. Clr Greg Best then directed questions to Council Director, Mike Dowling. “Do you understand what it is that you are going to be asked to build?” Clr Best said.

Mr Dowling said staff had already completed a detailed design, geotechnical work, cost benefits and taken the library and ET Australia through an extensive consultation. “The business plan for this is extremely flimsy,” Clr Best said, speaking in favour of the Rescission Motion. “The motion to be rescinded has all manner of flimsy documentation around it,” he said. Following the successful rescission of the previous resolution, Councillors debated multiple versions of an alternative motion. Labor Councillors attempted to reintroduce a motion that would have seen Concept 2 adopted (library plus commercial space across the two building sites) with an additional clause not to commence construction until 30 per cent of commercial space was pre-leased.

That alternative motion was ruled out of order as it had been voted down at the first April meeting. Mayor Smith also attempted to table a substantially amended motion, committing to provide accommodation for ET Australia and tenants within an integrated precinct supporting both the RPACC and the regional library, which Acting CEO, Mr Glendenning, accepted. Clr Lisa Matthews questioned whether any further delays would put funding at risk. Director Connected Communities, Ms Julie Vaughan, said “At the moment, Council only has a funding commitment, so there has been an expectation that we confirm the site and progress with design and development, so any further delay could potentially risk the funding.

“The date is getting very close, we need to start construction, so we obviously have to be doing groundwork. “We haven’t been given a definite date, but have been given a timeframe of when work is expected to be completed.” “This library, and I am a former Wyong Councillor, has been promised to this community for such a long time, and what are we doing, we are stalling,” Clr Matthews said. “I just cannot believe we are stalling on such an important community asset… if we don’t make a stance tonight and move forward, then we are just stalling, and the state and federal governments won’t knock on our doors anymore with more funding. “They will just think us a joke.