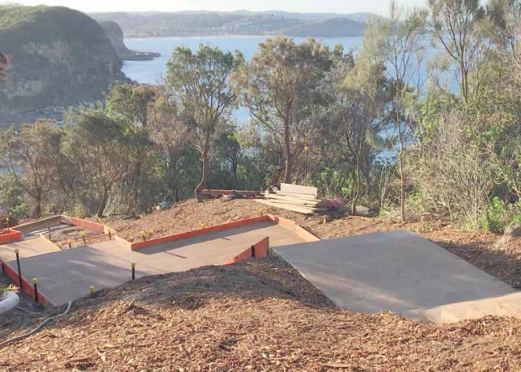 Work has continued on the permanent path at Winney Bay

The construction, which redevelops the track between Copacabana, Captain Cook Lookout and Winney Bay, has already torn down hundreds of metres of native bushland, as wide as seven metres across the full length of the track, Senator O’Neill said. “The Masterplan outlined by 5 Lands Walk was considered by Council in 2011, but no further consultation with the local community has been undertaken since,” she said.

“The construction is funded through an $875,000 grant delivered by Lucy Wicks and the Turnbull Liberal Government,” she said. It is understood Senator O’Neill did support the need for funding when she was the Member for Robertson. In response to recent community concerns, she has now called on Central Coast Council to halt all works until a proper consultation has been conducted.

“The decision to tear down hundreds of metres of native bushland hinges on consultation undertaken almost seven years ago,” Sen O’Neill said. “Copacabana residents and the Community Association were completely overlooked before this demolition began, and now Council is refusing to hear the public outcry against the development. “More than 130 local residents gathered at a Council information session to demand Council cease its work until an accurate consultation can be completed. “That’s a powerful message to Mayor Smith and Ms Wicks that our community wants a say on this development. “Let me be clear, I have and always will support the 5 Lands Walk, but I won’t stand by and let our community be ignored and our bushlands be destroyed.

“Ms Wicks should also explain why an $875,000 Federal Government grant was delivered despite a clear lack of any recent local consultation.” Recently, local residents have begun the “Save Winney Bay” campaign to protest the development. Central Coast Council, in response to community concerns, held a community information session at Copacabana Surf Club on Thursday, April 12. Council had secured Federal funding to construct 660 metres of stairs and pathways to connect the lower Winney Bay Reserve area to the top of the sea cliff near Captain Cook Lookout.

Before the meeting, Central Coast Mayor, Jane Smith, said there had been some concerns in the community about the works and the meeting was a chance to better understand and address the community’s concerns. “The new section of path will improve safety along an already well-used trail through the Winney Bay reserve, and better discourage access through areas of greater environmental sensitivity,” said Mayor Smith. “It will also better integrate our natural and built environments, creating a great recreational opportunity to really get out and enjoy what makes the Coast a great place to be.”

“Some vegetation, mostly weeds, has been cleared, but as well as the new pathway, the area will be regenerated to protect the natural environment well into the future.” Funding for this project was provided by the Federal Government through the Improving Your Local Parks and Environment program. Federal Member for Robertson, Ms Lucy Wicks, said the upgrade was fantastic news for the local community and the many tourists who visit the location every year. “It’s great to see the next step in upgrading the Five Lands Walk track, which is fast becoming one of the Central Coast’s most iconic destinations,” Ms Wicks said.

“This inspiring project is part of our $2.2m Environment Plan for the Robertson electorate, which the Coalition is delivering in partnership with Central Coast Council, the NSW Government and community groups who make the Five Lands Walk possible. “I’m proud that this Government is helping the Five Lands Walk connect people to people, and people to place, for generations to come,” Ms Wicks said. Copacabana resident and Save Winney Bay spokesperson, Ms Lorraine Parks, said the Central Coast Council’s community information session at the Copacabana Surf Club on April 12, was well-attended, and most of the residents were stridently opposed to the scale of development being pursued in the 5 Lands Walk Masterplan.

“I believe work has stopped and that Council left the meeting saying they would go back and rethink the whole project,” Ms Parks said. “I think Council came to the meeting all blustery, but by the end, they were obviously taken aback by the overall feeling in the room,” she said. “The whole argument for the Copacabana community is that we already have so very little space that we just do not want to see eight metre wide concrete roads and bridges across cliffs. “We are not opposed to the 5 Lands Walk, it is a great community event, a gentle stroll through the bush, but it has become very commercial, with sponsorship by Tourism NSW and a $5m grant to basically build a theme park at Winney Bay.

“We want it to be left alone and it won’t curtail the 5 Lands event if it doesn’t go ahead, but it comes down to stopping over-development in Copacabana,” she said. Local Aboriginals have also spoken out about the development, and a proposed permanent stair case appears to encroach on mapped midden and other Aboriginal objects in the proposed development zone. The 5 Lands Walk is a daylong community event along the Central Coast coastline from Macmasters Beach through to Copacabana, North Avoca and Terrigal.

The event attracts up to 16,000 people annually. Coast Community News has emailed and messaged the organisers of the 5 Lands Walk for comment as they do not have telephone contacts on their website. According to the 5 Lands Walk website: “The longer term vision for the 5 Lands Walk is the construction of a permanent all weather pathway, from MacMasters Beach to Terrigal. “It will become a significant attraction for both locals and visitors to the Central Coast. “Central Coast Council approved a Master Plan for the Walkway in March, 2012, and is actively seeking funds for its development and providing staff to assist in planning and construction.

“This walkway will be a fully signposted path which provides a safe route that takes advantage of the best our coastline has to offer. “It will respect the cultural heritage of our coast, both Aboriginal and European, while showing you the stunning views, beautiful beaches, bushland and cultural offerings of our community. “It will be available to walk 365 days a year, with the 5 Lands Walk celebrating our “People and Place” each midwinter. “Development of the permanent pathway will take place as funds become available.”