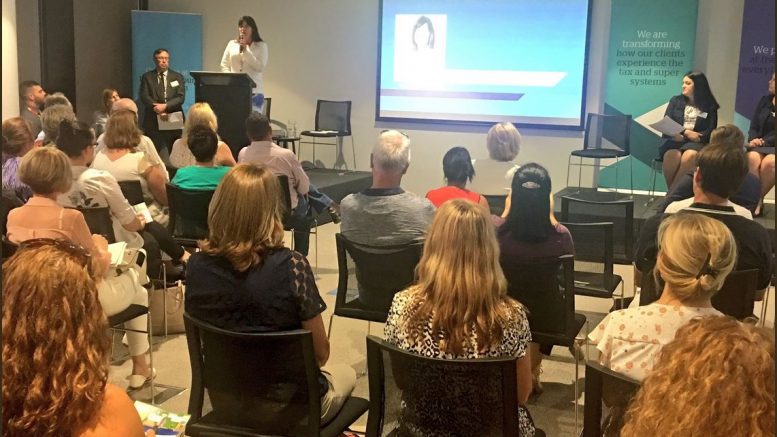 Member for Robertson, Ms Lucy Wicks, speaking at the Hello Gosford event at the new Federal Government building in Gosford

Client engagement and call centre staff will be the two main groups of ATO employees to occupy the new Gosford waterfront tax office, according to Deputy Commissioner, Ms Sue Sinclair.
Ms Sinclair was in town for the Hello Gosford event.
“Basically it is called Hello Gosford, and we have run similar ones to these around various Australian states, and they have proved very popular,” she said.
“We invite the community, including tax agents, businesses and individuals to give them information about the taxation office, our services and an idea of how we can help them.
“It includes information for new small businesses, we offer a lot of support on digital services that we can showcase to make their lives easier,” she said.
Ms Sinclair said it was 2014 when the Federal Government announced it would build a new federal office in Gosford, with the ATO as lead agency.
She said the site was chosen due to proximity of transport and the opportunity to forge strong connections with the University of Newcastle.
“It fits the bill for us,” Ms Sinclair said of the new location.
She said 80 employees would be working out of the office before Christmas.
“In January, there will be a surge of people joining us,” she said of the New Year intake of 260 employees.
Another 115 will be due to start in May, after which another 150 jobs will be advertised.
“The majority of the people who started with us are actually the experienced people from the ATO, many of whom live locally, but some have been drawn from Parramatta and other localities in Sydney,” she said.
The ATO’s Gosford workforce would be a mixture of full time, part time, casual and non-ongoing employees.
“Even though next year we will be getting up to 600 people, there will be a continual churn, and opportunities for the local community with casual and part-time positions coming up all the time.
“It is a very modern office and we have a big reliance on being very well connected with technology.
“We’ve got a very sophisticated tele-presence site which enables us to do direct communication with all of our offices nationally via tele presence.
“We also have flexible working arrangements, so the office is geared up to enable different styles of work.
“We have areas suitable for working on projects, areas for collaboration and then some more traditional spaces.
“We will have a call centre operating here in Gosford.”
Ms Sinclair said she did not know the exact number of operators but they would be one of the biggest groups of employees based in Gosford, followed by the client engagement group.
Those two categories of employee would account for 45 per cent of the overall ATO workforce based in Gosford.
The ATO is sharing the building with the National Disability Insurance Scheme (NDIS) Group.
“We are taking the whole space except for the NDIS Group, which has a lower part of the building and a separate entrance to us,” Ms Sinclair said.
“We are negotiating with another state agency, but I am not sure where that will land.”
She said the intake of new employees to the building was being staggered because they were mostly brand new employees who needed induction and training.
Ms Sinclair said she was unable to state exactly what percentage of employees would be local, but said they would definitely be the majority.
“The sort of work they are doing is customer service, dispute resolution, so we have a presence of legal teams, advice work and corporate advice, basically a replica of a traditional ATO office.
“Call centre and client engagement are the group that look after engagement with clients from an advice and help and assist point of view, and they are a big part of our organisation.
“They look after things like superannuation, small business and individuals.”