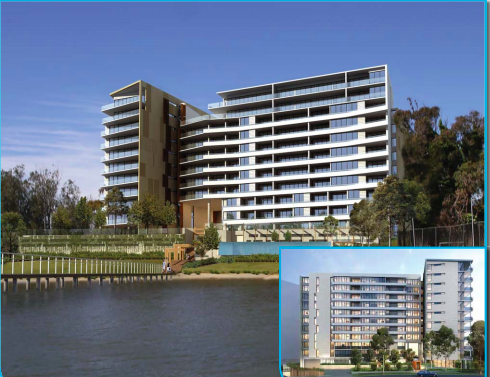 Barker Ryan Stewart, the project management company behind the $40 million Lakeside Gardens development at Toukley, announced that an appeal has been upheld in the NSW Land and Environment Court for the 11-storey mixed use development to proceed.

“Working on behalf of Rustrum Pty Ltd, development consent was granted for 109 units and ground floor commercial tenancies, all with basement car parking,” a Barker Ryan Stewart spokesperson said. The site at 214 to 226 Main Rd, will be extensively landscaped. The estimated construction cost of the development is $39 million and up to 355 equivalent full-time jobs would be created during construction, as well as fl ow on employment, according to the project manager. The site was identified as an “iconic key site” by Central Coast Council. “A main objective for this key site was to provide for a building of high architectural quality, displaying design excellence and innovative green building solutions in an iconic form.” A design competition was held for the site, with the winning design being awarded to Suters DWP, Newcastle.

The 5,300 square metre site is between Toukley CBD and The Beachcomber Hotel on Main Rd, Toukley, and has an extensive frontage to Budgewoi Lake. The architects have taken full advantage of the northerly aspect and the Lake views. The units on the upper floors will also enjoy views out to sea and to The Entrance and beyond to the south. “Rustrum negotiated a land swap with Central Coast Council which will mean improvements to Toukley Gardens Park and will achieve extensive views of Budgewoi Lake,” the spokesperson said. “The Park will also be expanded through to Rowland Terrace which will allow pedestrian and cycle access from Main Rd through to Osbourne Park on Budgewoi Lake.

“Barker Ryan Stewart assisted with the coordination of the Land and Environment Court appeal and provided expert witness and town planning services,” the spokesperson said. According to the Statement of Environmental Effects submitted to Council in support of the original DA: “The building has been designed in direct response to the nature of the site and Councils controls for iconic/key site development. “Design excellence in accordance with Councils controls has underpinned the design. “The design starting point was enhancement of the public domain. “The large building is a reflection of Councils’ intentions under its iconic site, key site programs to encourage local economic development.” The proposed development was the first of seven Toukley key sites to reach DA stage. “Whilst the proposal represents a large departure from existing development in Toukley, it is a benchmark for the future built form and character of the locality.”

Rustrum has been working towards its vision for the site since 2002, according to the SEE. The land had a prior history as a residential and tourist development but structures on the land were progressively removed as lots were acquired. In 2009, Rustrum received approval under Part 3A of the EPA Act 1979 for a 53 unit seniors’ living development. “This approval was legally commenced by demolition of a dwelling on part of the site and stood until the land swap rendered the approval invalid. “In 2011 Council independently included the Rustrum site in its Key Site program. “The requirements for the Rustrum site, under this program, included the land swap. Since the introduction of the key sites program, Rustrum has had the land swap subdivision DA approved, prepared a Buy and Sell agreement with Council, prepared and lodged a Planning Proposal, prepared a Voluntary Planning Agreement, prepared a site specific master plan and site specific DCP and finally prepared a development application.