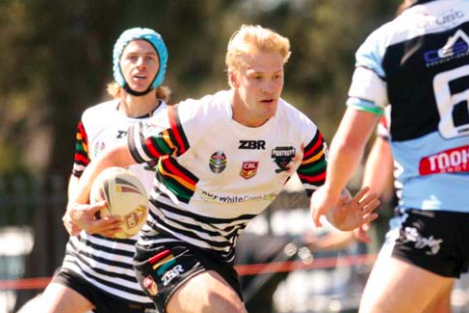 The Panthers managed to settle into the game quicker than their opponents and were rewarded for their composure with three first-half tries. Riley Foott bustled his way over on the left edge for the opening points of the decider. This was followed by a deft kick into the corner by half, Dane Booth, for his winger, Kyle Franklin, to catch and force before, Anthony Ratcliffe, inflicted a telling blow when he dived over just 30 seconds before half time. The Sharks trooped off with a 12-point deficit, rueing a number of missed scoring opportunities, yet thankful that none of the Panthers’ conversion attempts had found the mark.

The second half saw Terrigal hit back immediately, as, Jeremy Abdullah, took full advantage of a spilled kick to muscle his way over next to the posts. When winger, Saxon Ingegneri, finished off a slick spread left for the Sharks, the margin had suddenly been reduced to just a couple. The Panthers steadied however before managing to race over for the final two tries of the game to seal the title with a comprehensive 22-10 victory.

Undefeated for the first 10 games of the season, the Jarod Hamer-coached Panther cubs were brought back to the fi eld once boom youngsters, Jack Weir, Blake Taaffe and John Carroll, were elevated to fi rst grade beyond late June. This talented trio backed up to play two games each Sunday during the second half of the season, until the Berkeley Vale top-grade side were eliminated in the first week of the finals.