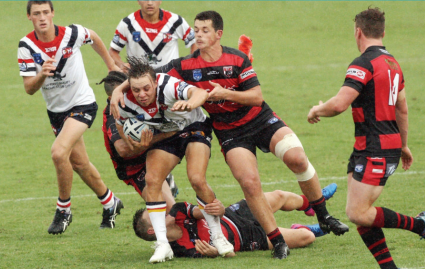 The Central Coast Roosters recorded gritty victories in both grades against North Sydney on Saturday, February 25, to maintain their perfect start to this season’s junior representative rugby league program.

Fresh from a resounding away win over Wests in the previous round, the Central Coast’s Matthews Cup side had to battle hard to overcome a tenacious Bears outfit, in slushy conditions at Kanwal. The local lads led by six early in the game, yet trailed 10 to 6 at half time. The second period ebbed and fl owed, as the slippery conditions, combined with over exuberance, made it difficult for either side to build any meaningful pressure.

The game’s telling play arrived with only four minutes left on the clock, when Central Coast skipper, Ryan Jones, finished off a sparkling attacking raid down the left side which featured a slick interchange of passes among half a dozen Roosters’ players.

Ryan Jones, a Gosford Kariong junior playing his second season of Matthews Cup football, crashed over for his second try of the afternoon to level the scores. The Central Coast sealed the 12 to 10 victory when Erina centre, Corey Fenning, calmly slotted an angled conversion. In the day’s follow up game, the Coast ran to a handsome lead in the SG Ball Cup fi xture before being forced to hang on grimly as driving second half rain and a resurgent opposition made life difficult for Mark O’Meley’s tricolours.

The locals had started the game full of running, and former Newcastle prop, Mokena Moeke, charged across, from a simple one pass off the ruck, to score the game’s opening try after just two minutes. The lead extended to 10 midway through the half when winger, Tallis Angianga, leapt high into the Leagues Club corner to bring down an angled chip kick, delivered via the boot of left side playmaker, Sam Paul.

When team captain and Central Coast junior player of 2016, Elih Jackson, dummied and bustled his way over from 20 metres out, the score had pushed to 16 to 0 and a rout looked likely. To North Sydney’s credit, they plugged the holes in their defence and responded with two converted tries of their own, scored either side of halftime, as the deficit was reduced to four.

Despite the miserable conditions, the Bears threw the ball about brightly during the game’s latter stages in a desperate bid to gain scoreboard parity. The home side’s scrambling defence held fi rm, however, and the Roosters were able to hang on to record a laudable 16 to 12 victory.