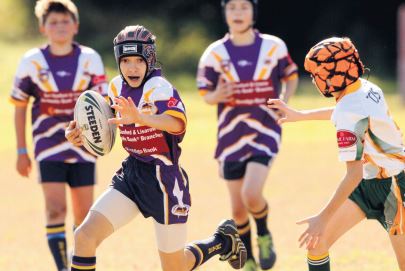 The Gosford Kariong junior rugby league club has four of seven teams remaining in semi-final contention with just one round still to be played in this year’s junior competitions.

The U10(1)s are striving to create a piece of club history as they ready themselves for a battle with the second placed Kincumber at St Edwards College on Saturday, August 15.

The Gosford boys are hoping to become the Storm’s first ever division one team to reach a final series and with coach Robbie Campbell’s catch phrase of “tackle, tackle, tackle” ringing in their ears, the goal remains eminently achievable.

For weeks now, they’ve been locked in a three way battle with The Entrance and Wyong for the last remaining semi-final position in the Central Coast Rugby League.

With a 42-10 victory over Ourimbah in their most recent game on Saturday, August 8, the Storm boys remain very much in the hunt. In the U11(2) division, Gosford have notched three consecutive victories to storm into fifth spot and their recent purple patch of form has the competition heavyweights looking nervously over their shoulders.

A final round victory at St Edwards will guarantee Greg Eather’s boys a semi final berth and a likely rematch against the Wyong Roos; a team they managed to defeat 40-16 just three Saturday’s ago. Top three finishes beckon for the Gosford U13(2) and U12(3) teams, with both sides having traversed impressive home and away seasons.

The U13(2) competition has been dominated by Ourimbah throughout 2015 and it will take a huge upset if the undefeated Magpies are to be toppled. Gosford have a talented and well-balanced team however and would love nothing more than to enter a grand final as heavy underdogs and give plenty of cheek against their cocky northern neighbours.

Before that scenario can eventuate; Blue Haven, The Entrance and Berkeley Vale will all need to be taken care of. The U12(3)s look to be Gosford Kariong’s most realistic chance of lifting grand final silverware. Blue Haven; who have beaten the Storm in both their clashes this season and The Entrance loom as Gosford’s main rivals in what promises to be a fascinating finals series.

A well taken 24-14 victory over the Tigers in the season’s penultimate round has given the Storm boys plenty of confidence as they eye the big games that lie ahead.

Mountain Districts Association calls on the Premier to close landfill