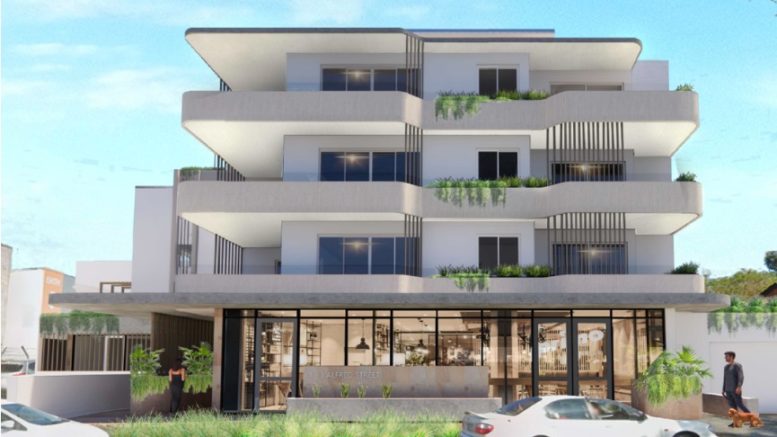 An artist's impression of the proposed development

A new application for a shop-top housing development at Umina Beach has been lodged with Central Coast Council after the initial DA was rejected by the Local Planning Panel in December.

With an extended date for submissions until July 30, the new application addresses the main reasons for refusal cited by the panel, reducing the overall bulk and scale of the project.

Located on a T-shaped block at1-3 Alfred St and 315 West St, the development would see commercial premises at street level topped by four levels of housing, providing 14 apartments.

A Statement of Environmental Effects (SEE) lodged with the application says the development would provide much-needed commercial space and housing in the Umina CBD.

The site presently contains an existing single-storey chemist shop with a shopfront to West St and parking at the rear with access to Alfred St.

To the rear of the chemist shop, with frontage to Alfred St, is a prefabricated building used as a pathology collection facility and an older single-storey brick house.

The proposal is for demolition of the prefab building and house and relocation of the parking spots at the rear of the chemist shop.

The new application sees a reduction in commercial space and floor space ratio and increased setbacks to address concerns over the appearance of the building from West St.

While the overall height of the development remains unchanged, the fifth story has been set back sufficiently that it is not visible from the West St frontage.

Basement level car parking spaces have been increased from 35 to 37.

“Where possible materials will be salvaged during the demolition process and recycled,” the SEE says.

More than 10 submission protesting the development, some of them with multiple signatures, were received after it was first proposed last year, including an online petition with 67 signatories.

Residents’ main concern was over the height and scale of the development.

“I believe that the height limit should be preserved at two storeys to allow light and breeze and preserve the village like area,” one submission said.

“The development is too big and too high in an area that is already saturated with medium density accommodation,” said another.

One submission raised the issue of strain on infrastructure, saying the village was already struggling to cope with traffic and parking.

Among other issues raised was shadowing and the setting of an “unfortunate precedent”.

Another submission said the development was out of keeping with the “breach town vibe” Council has been trying to create at Umina.

“It is out of keeping with the area and would have adverse effects on the surrounding community and the environment,” it said.