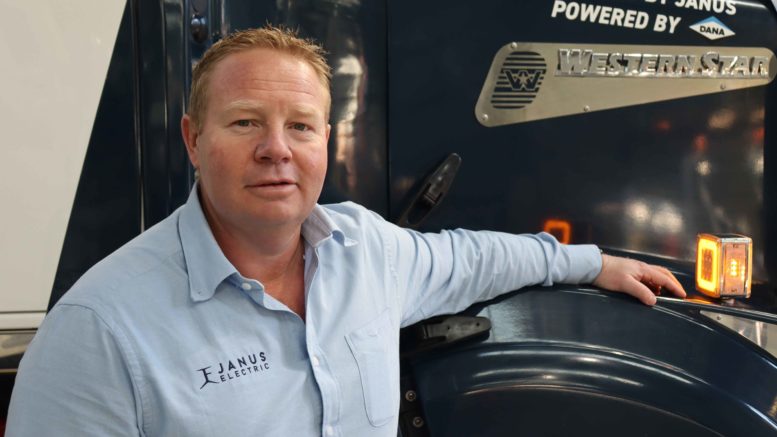 In the transition to a low-carbon economy, the shift to electric vehicles is widely seen as a critical element – one business at the forefront of that shift is Central Coast based Janus Electric.

Janus Electric is based in Berkeley Vale, it fits out new heavy vehicles with batteries or, alternatively, installs a conversion module to convert an existing diesel-powered truck to battery power.

“Janus Electric is currently working with a number of partners, including Qube and OZ Minerals to test their product.
One project involves fitting a battery to a triple road train, making it the heaviest electric powered vehicle in the world.

“The mileage for battery-powered heavy vehicles will depend on the load and topography, but a regular prime mover will get 400-600kms from a single battery, while a triple road train can travel around 360kms on a fully-charged battery,” Forsyth said.

To support the battery-fitted trucks, Janus Electric has developed an exchangeable battery technology here on the Coast, hoping to set up at suitable locations along the East Coast.

“For existing fleet owners, the conversion module developed by Janus allows older vehicles to be completely retrofitted – replacing the diesel engine with a battery that connects to the vehicle’s existing power systems, transmission and other auxiliary systems.”

Conversion costs are currently around $150,000 less the resale value of the diesel engine which is returned to the vehicle owner.

“The payback period on conversion to battery is only 12 months – that’s far shorter than replacing the diesel engine mainly because maintenance costs are 60-70% cheaper than diesel,” Forsyth said.

“There are fewer moving parts, no fuel filters, no air cleaners, no nothing.”

Janus has estimated the all-in running cost of an electric truck is around 35c compared with $1.05 for diesel (at current pump prices) and diesel hydrogen at $1.20 per km.

The batteries comprise 1080 lithium-ion cells – Janus uses lithium because of their high energy density.
The battery cells are currently imported and assembled by Janus Electric at their Berkeley Vale site along with the manufacture of all their other componentry.

Forsyth is confident local battery manufacturing will soon be an important supply chain and ultimately take over from the imported batteries.

Forsyth believes we are on the cusp of a major shift by fleet owners to electric vehicles, especially mining companies that are under increasing pressure to reduce their carbon footprint.

Lex’s family has been in the transport industry for 40 years and when asked why he’s so passionate about the company he talked of leaving a real legacy for the industry.

Janus has had absolutely no support from the government so far, which he thinks is putting too much emphasis on hydrogen.