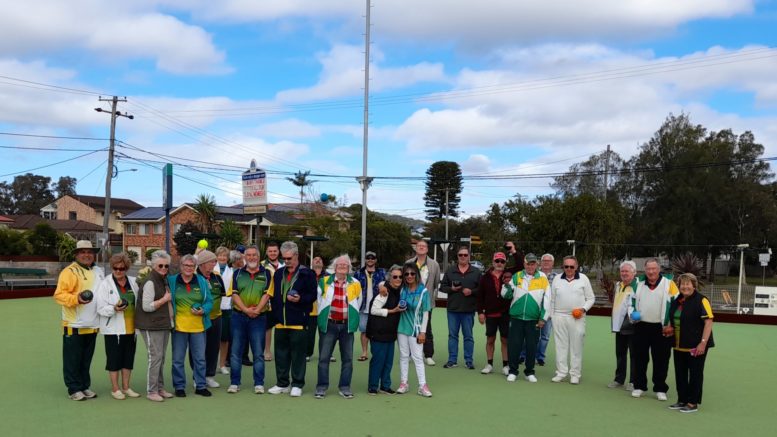 It was the end of an era on June 18 when members of Woy Woy Bowling Club held a gala day to celebrate almost 90 years of operation as it prepared to cease trading on June 20.

President James Cook said the club had faced financial difficulties since it was forced to sell to private owner Woy Woy Holdings in 2003 after going into receivership following renovations.

“Bowls is a game which doesn’t pay its own way anymore – there has been a decline everywhere for bowling clubs,” he said.

“Our membership has been steadily declining – once we had more than 300 members but now we only get 12-14 people on bowls days.

Cook said it had come to the point where it was not financially viable to pay rent and escalating electricity bills and that there was no chance of producing enough revenue to cover costs.

“None of us is happy but it comes down to running costs – if we’d been able to double our numbers we would probably still be going.

“But retirement habits have changed.”

Woy Woy bowlers will play out the 22/23 bowling season as a sub club of Umina Bowling Club after which time members will make the decision on whether or not to join other clubs.

Woy Woy Bowling Club was the second oldest bowling club on the Central Coast after Wyong.

It began in October 1932 when a meeting was held at a newsagency in the Boulevarde attended by 13 residents.

In 1933, Woy Woy Shire Council granted the committee use of the ground at the rear of the Bayview Hotel and the following year a four-rink green was built on the site.

In 1934, with financial assistance from the Council, an old house was purchased and moved to ground at the rear of the green to be used as a clubhouse with the first meeting held on April 19, 1934.

Woy Woy Bowling Club became affiliated with the Royal New South Wales Bowling Association in June 1933 and in June, 1936, women were officially granted use of the greens and clubhouse every Monday.

Nine years later members realised a new and larger site was needed to cater for the increasing number of members and in 1945 the committee approved the purchase of land on the corner of Burge and Brickwharf Rds, bought the original clubhouse from Woy Woy Shire Council and moved it to the new site.

A grand opening was held on Christmas Day, 1948 and a liquor license was granted in October, 1958.

In 1964 plans began for a larger clubhouse and more green space.

An adjoining property was bought, a further green was constructed and the new clubhouse was officially opened on May 3, 1969 with total building cost of $100,000.

For many years the club enjoyed great success, with its three grass greens in constant use by bowlers from all over the Coast.

Over many years Woy Woy Bowling Club has raised an enormous amount of money for numerous organisations such as Child Flight, Gosford Hospital children’s oncology section and the Cancer Council.

Several applications for redevelopment of the site in recent years have been unsuccessful and it is understood it is now on the market.