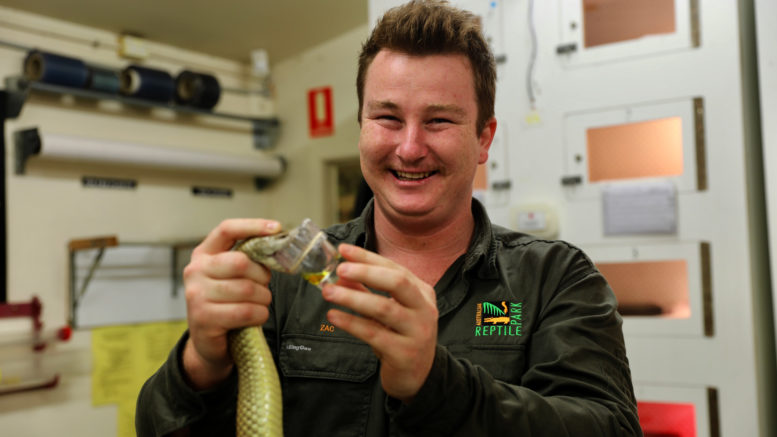 Whiplash the coastal taipan has broken his own record for producing the most raw venom from a single yield at the Australian Reptile Park.

The Park is renowned for its deadly venom program, in which snakes are milked to save thousands of lives across the country.

Venom Supervisor Zac Bower was shocked when Whiplash produced a massive 4.9 grams of venom in a single milking.

His previous record yield was 4.5 grams – well above the average yield of 1.8 grams per milking.

The amount of venom extracted in the latest milking has the potential to kill up to 3,000 human adults.

“I knew immediately the vial of venom felt much heavier than usual,” Bower said.

“A small, excited part of me thought we might have broken the record slightly but not to the extent that we did.

“I would like to say I’m shocked Whiplash has managed to break his record again, but he has broken his own record about three times now and he just keeps giving more and more venom.

“He is the most amazing snake I’ve ever worked with and keeps me on my toes.

“But it’s worth it knowing he is saving so many lives.”

Every year there are 2,000 reported snake bites in Australia, with over 300 people receiving antivenom and having their lives saved by the program.

Once the venom has been milked it is sent to Seqirus in Melbourne to be made into antivenom and distributed throughout Australia.

The Park has reinforced its warning that venomous snakes are out and about on the Coast due to the wet, humid weather experienced so far over the summer.

Staff are urging residents to revise snake bite first aid to assist in surviving a bite from a venomous snake.

This includes keeping the bite victim calm and immobile, removing all jewellery/watches, applying a pressure-immobilisation bandage to the bite site, then bandaging the entire limb (not just the bite area) and seeking emergency medical assistance immediately by calling an ambulance or going directly to hospital.

Visitors can see coastal taipans alongside many other venomous snakes at the Australian Reptile Park in its famous Lost World of Reptiles exhibit.

Those who want an up-close look at the snake milking process can join a daily Behind the Scenes tour where they can witness the important work the keepers undertake first hand.