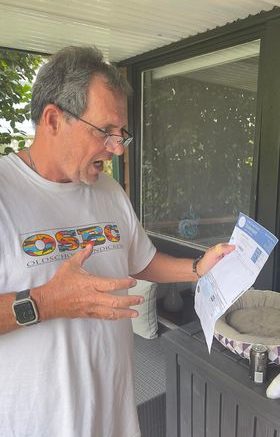 When a Blackwall resident received a letter supposedly from Central Coast Council for $393.54 for an overdue bill dated from 2015, he thought it was a scam.

Craig Caldwell rang Council to alert them to what was being perpetrated in their name but no, the Council rang him back and explained it was really a Council bill for work done in 2006 – before he even owned the house.

It was for kerb and guttering done way back then, when the area was still Gosford City Council.

Caldwell was – and still is – flabbergasted.

His neighbour has received the same sort of letter but their amount is almost three times Caldwell’s bill.

They can’t figure out why.

Since Caldwell has spoken of his plight on social media, other people have come forward with similar bills sent to Wamberal and Kincumber.

Caldwell said a council staffer said there were lots of these bills being sent out.

He got the impression the new amalgamated computer system has uncovered old bills from decades ago that were never sent out.

“The bill doesn’t even explain what the matter is about; it simply states it is from 2015 and is overdue, there is no accompanying explanation,” he said.

“I find this absolutely outrageous that Central Coast Council is making a cash grab using some defunct account from 2006 to bolster their coffers,” he said.

“It’s a total disgrace that they are now trying to activate discontinued accounts to take back some of their mismanagement.”

Caldwell has contacted A Current Affair and hopes the matter will make prime time television.

He said Council told him an explanatory letter was on its way.

Central Coast Council’s media unit cautioned CCN to make sure our reporting of this matter was factually correct and issued the following statement: “In January 2022, Central Coast Council issued debtor statements to a small portion (fewer than 3 per cent) of its customers to advise of outstanding current and historical charges.

“In December 2021, Council upgraded its property and rating systems for customers across the Coast, installing a new and improved system which provides a central location for all rates payments, property applications and certificate requests.

“The upgrade finished ahead of schedule and created a more convenient, streamlined experience for our residents and ratepayers.

“During this upgrade, various current and historical outstanding charges were identified as two systems (previously Wyong and Gosford) became one.

“All statements issued during January 2022 are correct and valid.

“The new property and rating system includes an updated template for debtor statements which displays the information in a modestly updated design.

“Council recognises this design change was not expressly advised to customers and apologises for causing any confusion on the legitimacy of these debtor statements.

“Council intends to contact customers who received a debtor statement to ensure they are aware that the outstanding amount owing is correct and can ask any questions they may have.

“Council thanks the community members who raised their concerns about the debtor statements with Council, and for their vigilance on this matter.

“For any questions relating to these Council-issued statements, residents and ratepayers are encouraged to contact Council via the 24/7 online Customer Service Centre or by calling 1300 463 954.”