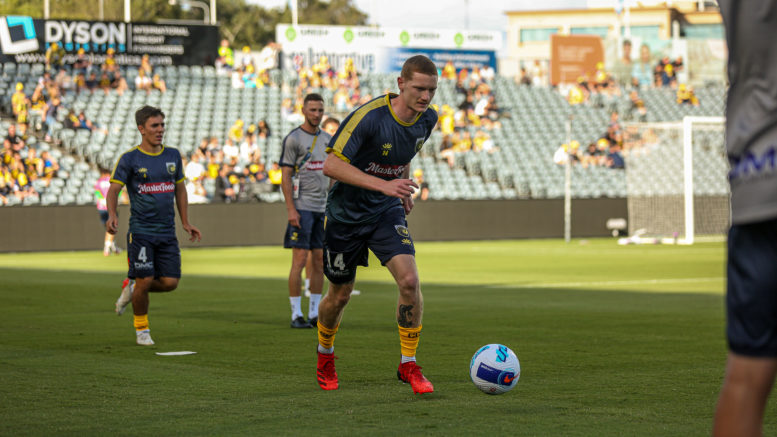 Kye Rowles returns to the Socceroos, leaving the Mariners for their upcoming match against Sydney FC, January 30, 2022.

A home ground loss for a COVID depleted side, a mid-week international signing, a Socceroos call-up and preparations for a potential third victory over Sydney FC in a row has made for an interesting, topsy-turvy week for the Central Coast Mariners.

Sunday, January 23 brought a difficult return to the A-League in 2022, with defending champions, Melbourne City exposing their hosts’ limited squad size to win, 3-1.

Head coach, Nick Montgomery was quick to action after recognising COVID’s heightened voracity toward the smaller clubs in the A-League who depend more on key players filling the team sheet week to week.

His response was sealing the transfer of Scottish-Australian striker, Jason Cummings, already arrived in country from Dundee FC in the Scottish Premier League.

26-year-old Cummings brings to the Coast a wealth of European football experience with a multitude of scoring and winning accolades in Scotland and England, yet also a tongue-and-cheek temperament that has seen him in contempt at previous clubs.

He began his career at Hibernian FC, where he made over 100 appearances and scored 55 goals to help his team win the Scottish Cup for the first time in 114 years.

In 2017, he became the first player since 1961 to score more than twenty goals in a season for Hibernian

Since then, Cummings has played for such clubs as Nottingham Forest, Luton Town, Peterborough, the Rangers and Shrewsbury Town, where he has worked to match his earlier prolific form in front of goal.

Throughout this period, one career highlight was a hat-trick for the Rangers in 2018 against Falkirk FC in the Scottish Cup quarter final.

Another was achieved with Shrewsbury in 2020 in the FA Cup Fourth Round match against Jurgen Klopp’s star-studded Liverpool, wherein Cummings came on from the bench in the second half to net two goals, deadlocking the end score at 2 – 2 and forcing a replay match.

However, this goal scoring talent also brings with him an individual exuberance in character that has led him into butting his head against the collective spirit of his past teams.

Mariners fans will come to recognise his infamous back-of-hand tattoos inspired by Batman’s nemesis, the Joker: a devilish grin in a shiny-white mouth above the mantra, ‘Smile’.

Cummings’ idolisation of this pop-culture figure became the main cause of his recent drift from Dundee FC when he attended a 2021 Open Goal Live Christmas show in Glasgow dressed as the Joker, an act his former club boss, James McPake called “completely unacceptable”.

Yet Mariners Head of Football, Ken Schembri is excited to herald in this exciting new talent that will bring more depth to the squad as they deal with COVID attritions.

“Jason provides our club with more power and experience in our attacking zone,” Schembri said.

“Clearly the ongoing COVID situation with have a huge impact on this season and depth in squads will be vital to our success.”

For Cummings, this is new opportunity playing football in a new part of the world and may lead him to future opportunities with the Socceroos, made possible by his Australian mother and passport.

“I am really excited to further develop my football here in Australia,” Cummings said.

“I have only been here a couple of hours and really looking forward to getting straight into training with my new teammates.

“I am not taking this opportunity lightly and want to reward the Central Coast Mariners.

“Being an Australian citizen, I knew it was only a matter of time until I came out here and I am ready to make an instant impact and show people what I can do.”

One of his new teammates, Kye Rowles, may provide Cummings the national team example after confirming his own spot in the Socceroos for two Asian Cup qualifier matches against Vietnam and Oman.

“I am super happy to be given the opportunity, and I am really looking forward to the experience,” said Rowles.

“It is a massive honour to represent your country and I am humbled to be involved in the Australian set up once again.

“I would also like to say a special thank you to everyone that has helped me along my footballing path, as without their dedication and time, I would not be in the position that I am today.”

The former of these matches will be played in Melbourne Rectangular Stadium on Thursday, January 27; the latter in Muscat, Oman, early morning on Wednesday, February 2 (AEST).

Whilst he represents the country, the Mariners will lose Rowles from their team sheet, expecting his return in time for the FFA Cup Grand Final match now scheduled for Saturday, February 5.

In the meantime, the Mariners are scheduled to face Sydney FC in the A-League on Sunday, January 30, hoping to make history with their first ever third win in a row against the historical trump of New South Wales.