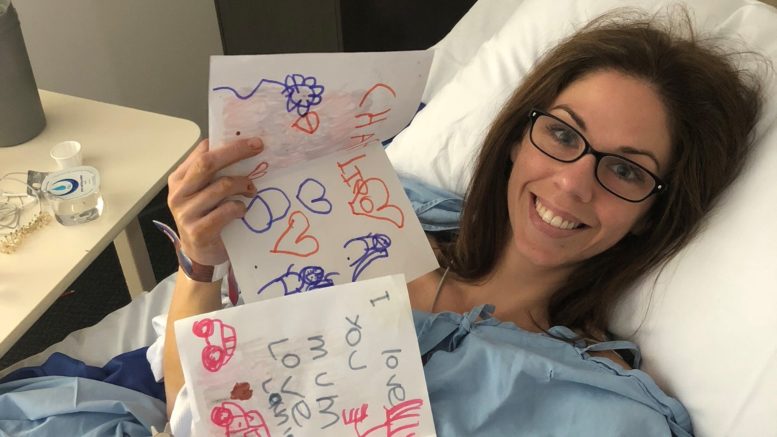 Jen O'Neill after being diagnosed in 2020

As Heart Awareness Month, REDFEB, approaches in February, Jen O’Neill of Narara is urging residents, and especially women, to be on the lookout for signs of heart attack.

O’Neill, who suffered two heart attacks by the age of 40, said the disease could strike anyone at any time.

“The type of heart attacks I had were SCADs, or spontaneous coronary artery dissections, where a tear forms in a blood vessel in the heart,” she said.

“I had the first when I was 36, with no family history of heart disease.

“I was chatting to my husband after a stressful day when I had a pain in my left breast.

“Because I was breast feeding I assumed it was mastitis but the pain shot down my arm and I had tingling – and then a really intense feeling of wanting to be sick.

“My husband, who is a police officer, suspected I was having a heart attack but I told him not to be ridiculous and refused an ambulance because I thought I would be wasting a valuable resource.

“But when I got to Gosford Hospital, even the medical staff were shocked when tests showed heart activity.

“It was very confronting because I didn’t fit a heart patient stereotype but an angiogram found a massive tear in an artery at the front of my heart.

“The condition was managed with medication and I thought I was home and hosed until it happened again while I was at work in 2020.

“That time I had a pain in the back, which I put down to a gym session the day before, but apparently I lost colour and went grey and a co-worker convinced me to call my GP, who recommended I go the the hospital.

“Again I refused an ambulance but it turned out I had another tear – this time in an artery in the back of the heart, which is why it presented differently.

O’Neill is urging others not to ignore the signs of a possible heart attack and to go to the hospital if in any doubt.

“It’s just so important,” she said.

“My condition is medically managed and I am doing OK apart from side effects such as fatigue and bruising because of the blood thinners, but people have died from SCAD heart attacks when not properly diagnosed.

“I urge everyone to watch out for the signs.”

During February, Heart Research Australia is inviting all Australians to wear red for someone close to their heart to help keep families together for longer.

The organisation is also promoting new resources which highlight the differences in heart disease symptoms, prevention and management for both men and women.

A spokesperson said heart disease is one of the biggest killers of women in Australia and that warning signs can differ between men and women.

“Despite heart disease being a leading cause of death in women, only one in five Australian women are aware of this,” Research Australia CEO Nicci Dent said.

“This highlights a huge gap in understanding and the need to raise awareness about the different symptoms and risks for women.

For more information on REDFEB and to donate, go to www.heartresearch.com.au.