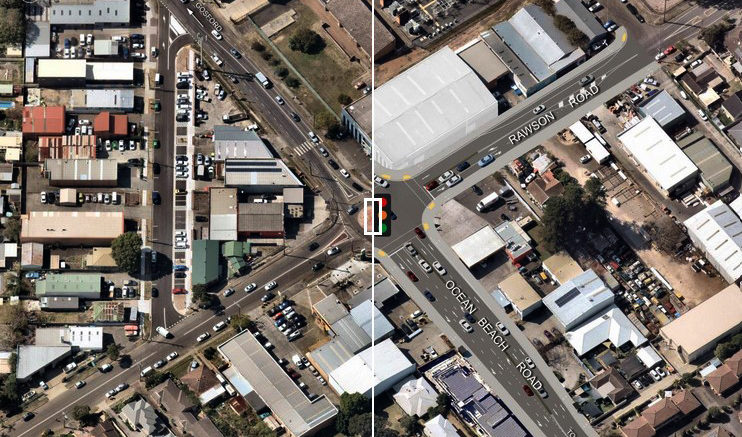 Business owners surrounding the Rawson Rd and Ocean Beach Rd roundabout at Woy Woy say they are infuriated by the lack of planning and consideration from Central Coast Council regarding the proposed intersection upgrade.

The detailed proposal was announced earlier this month in a joint media release from Council and Federal Member for Robertson, Lucy Wicks.

Local business owners said they only heard about the project via a generic Council letter dropped off at their premises last week.

The $32.5M proposal includes a two-year plan to replace the existing single-lane roundabout with a signalised intersection, including signalised pedestrian crossings across all four sides of the intersection.

The project is expected to start construction in mid-2024 and finish by mid-2026.

Store Manager of Ocean Beach Tyrepower, Vic Mostaert, said the proposal was likely to affect their business long-term and he did not see the purpose of the upgrade.

“This roundabout works very well, we have very few accidents and the only time we get traffic is in the morning and afternoon, it banks up both ways and that’s the only time during the day.

“The roundabout is very effective and efficient; it works very well as it is.

“They are going to take some of our land – when we’re up and running it won’t affect us too much – but the time to build it, it’s going to affect us a lot.

“I don’t know how they are going to get five lanes across there, I think it’s going to be very difficult.

“Someone nearly died at the crossing at the railway line the other week … that’s where they should be putting the money.”

Mostaert said the proposal could see vehicles bypass the new intersection via his business which would put the safety of his staff and customers at risk.

Store Manager of 7/11, Christie Gordon, said the proposal would “drastically affect her business.

“Having a look at the plans, it looks like there is going to be median strips down both roads which is going to impact traffic being able to get into our driveways,” Gordon said.

“I also foresee there being an issue with cars turning left off Ocean Beach Rd onto Rawson Rd if that light turns red, they can come straight through my driveway and fly through the other driveway which could cause issues with traffic, people could get hit.

The construction of the intersection is going to affect us massively … they’re going to cut into our footpath and land.

“It will also affect our delivery trucks as they won’t be able to turn right into our driveway because the median strip will be there.

“The upgrade is needed not at all. During peak hours, yes, there is traffic build up but there is nothing dangerous.”

Gordon also said 7/11 had purchased the land from Council under false pretences.

“When 7/11 first leased this land, before we event built, apparently the plans had already been made and it had already gone through the Council and we were not told before we purchased the land here that it was going ahead,” Gordon said.

“I don’t believe the landlord, the guy who owns this property, knew about it before he sold us the land either.

“I live on the Peninsula; I’ve seen the roads around here and there are a lot more places that money could be better spent than on this intersection.”

Proprietor at Smash Repairs on Rawson Rd, John Bakewell, said he does not see the purpose of the upgrade.

“It will leave a big impact on our business,” Bakewell said.

“We deal in motor vehicles so we need room to put cars, and if we don’t have that space, I don’t know what we will do.

“We use that road for parking every day and we won’t be able to …after parking in the same spot for 40 years.”

Federal Member for Robertson, Lucy Wicks, said community members should review the plans and have their say.

“We know how important roads upgrades are on the Peninsula and the Rawson Rd and Ocean Beach intersection is a major problem during peak traffic times,” Wicks said.

“Projects like this, which will improve traffic flow and safety at intersections that have become bottlenecks, are vital for a growing region such as the Central Coast.”

Council said the project would help improve travel times and increase road and pedestrian safety, suggesting a 66 per cent improvement in traffic delays with the average maximum vehicle queue length reduced by over 360 metres.

Council Administrator, Rik Hart, said an intersection upgrade at this busy location had been identified as necessary.

“Council is liaising directly with the owners of properties located adjacent to the intersection which may be impacted by the works, and I encourage all community members to have their say on this major upgrade,” Hart said.

Locals can view the plans and provide feedback by visiting yourvoiceourcoast.com/obrawson.

Feedback will be received up until January 17.