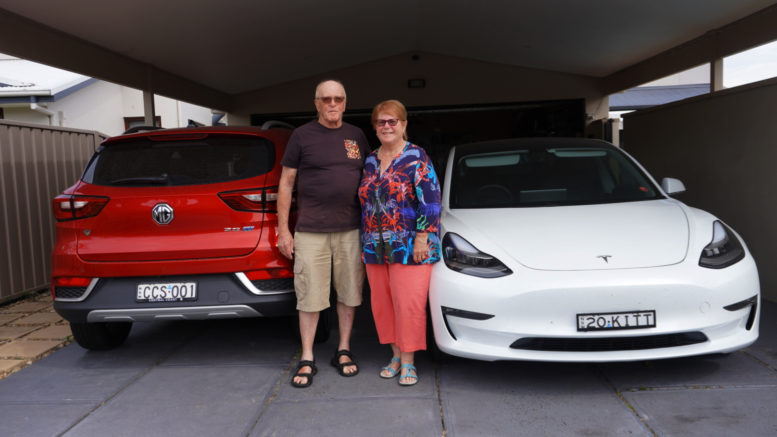 Green Point residents, Larry Lutz and Lynnette Wilcox-Lutz, switched to the EV lifestyle in late 2019 when they purchased a Tesla Model 3, and they loved the switch so much they bought a second one, a MG ZS EV earlier this year.

The pair said that they love the zero emissions way of life, but more can be done to encourage others to buy EVs including expanding the current public charging infrastructure.

“I first saw a Tesla in the Blue Mountains five years ago and I thought wow they’re fantastic, such a great idea for the environment.

“We talked about it for a long time and unbeknownst to me Larry had booked a test drive.

“We went for a 45-minute test drive and when we got back, we went to the computer and ordered a Tesla,” Lynnette said.

“It was the only thing I wanted when I retired, we’d been overseas, so we decided that we were going to get an electric car.

“Our car came in the second shipment of Model 3’s to Australia which was December 2019.

“It’s a fantastic driving experience, the biggest difference I have noticed is the smell.

“I moved my old car from the driveway and thought that it’s stinky.

“They’re also so quiet, and so smooth.

“At first, I had range anxiety about how much it would take to get to Wollongong and back home, but you find so many chargers on the road when travelling that you just stop and charge for an hour and walk around and then go again.

“You just need to plan your trips with where the chargers are located,” Lynette said.

To charge their cars at home, the pair invested in a Tesla battery that stores energy collected from their solar panels.

They said that the battery can charge the 75kw battery in the Tesla from 20 per cent to 80 per cent in just three and a half hours, and their MG with its 44kw battery can be charged in five hours.

However, Larry said that the public charging infrastructure is lacklustre on the Coast.

“On the Coast there are some Tesla chargers at Bunnings in Tuggerah and two other charging points under Coles in Erina Fair which are usually parked in by ordinary cars.

“Unless you charge at home or go to Tuggerah there is nowhere else.

“That’s it on the Coast.

“They really need some sort of set up in Gosford itself,” Larry said.

On November 9, the Federal Government announced their $250M Future Fuels and Vehicle Strategy that aims to support the uptake of new vehicle technologies to reduce transport emissions.

The strategy will provide at least eight new EV charging stations on the Central Coast.

Federal Member for Robertson, Lucy Wicks, said round one of the Future Fuels Fund would deliver 403 new stations and accelerate the roll out of fast charging stations across all capital cities and key regional centres like the Central Coast.

“Final locations are yet to be identified but Gosford and Woy Woy are potential sites for these new charging stations,” Wicks said.

The planned chargers will be able to charge at least two EVs concurrently at 50kw which will fully charge an electric vehicle in approximately one hour.

“Through this strategy, we’re helping to enable consumer choice for new vehicle and fuel technologies, ensuring Australian motorists can choose the vehicle that is right for them, be that petrol, diesel, hydrogen or electric powered.”

Wicks did not give a firm timeframe for the implementation of the strategy on the Coast.

Federal Member for Dobell, Emma McBride, said Australia was lagging behind the rest of the world when it comes to the uptake of electric vehicles.

“Just 1.5 per cent of cars sold in Australia are electric or plug-in-hybrids, compared with 17 per cent in the UK and 85 percent in Norway.

“That’s despite growing enthusiasm for more electric vehicles in regions like the Coast but unfortunately, EV’s remain largely unaffordable for most families.

“This is because of years of inaction and scaremongering from the Morrison Government.

“Just two years ago, they were claiming electric cars would end the weekend, and now they’ve drastically switched gears.

“Meanwhile, Labor has been calling for a greater uptake of EV’s since the last election.

“We are planning to introduce an Electric Car Discount to make EV’s cheaper for families, by introducing an exemption for import tariffs.

“It’s time we made it easier for Coasties to invest in EVs,” McBride said.

According to research conducted by the Grattan Institute, Australia needs to switch to electric cars to cut carbon emissions, and to not become more dependent on cars coming out of the pandemic.

The Grattan Car Plan: Policies for Cleaner Transport and Better Cities, calls on the Federal Government to impose a cap, or ceiling, on the emissions allowed for new cars sold in Australia each year and ratcheting that ceiling down to zero by 2035.